Evans taking each game as it comes 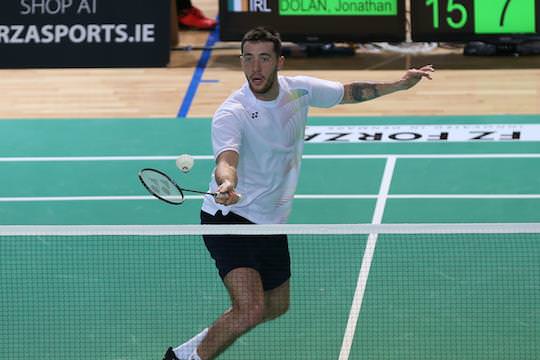 Jonathan Dolan has admitted that his move to the Badminton Europe COE has improved his badminton.

The Irish sensation joined the Badminton Europe team in February as he continues his rehab from an injury which he suffered one and a half years ago.

— I got talking to Nicky, one of the coaches here. She seen me playing at the Welsh International in 2017, and she offered me to come over here. Jonathan Dolan told Badminton Europe.

— Since I came, I feel that training has gone really well, and that I am getting back to my best. I am getting stronger and fitter. The coaching and the sparring in the centre are very good. He added.

The difference in training since joining Badminton Europe

Dolan who is still a well-known figure in his home country despite his move to Denmark, believes that having different personalities around, helps the group.

— The atmosphere around the place is great, sometimes it is better to be with people outside of your home nation because you don’t get some of the egos.

— When you have lots of players coming from different countries to one place which isn’t their home country, you know that everyone is going through the same thing. He said.

— My game has improved dramatically since I arrived here, one thing that is down to is that there are always four coaches here at any given time, whereas back in Ireland, there was only one. Dolan added.

Close to retirement before Badminton Europe

The Irish badminton star has made it no secret that his knee injury which he sustained over a year and a half ago, has improved dramatically since he joined the centre in Holbæk, despite thinking he might have to put the racket down early.

— I was nearly resigned to the fact that I would never play again because it had been so long and there hadn’t been any improvement.

— Since I came here, I have always had to do rehab, and I have been helped through that a lot. I have been given programs to follow to improve which I never had at home. My knee has improved a lot since training at Badminton Europe.

—  This feels like a second opportunity for me to play without an injury and get back to my very best, and compete in the same way as everyone else does. He said.