Double for Andersen and Kaisti & Nystrom go back to back 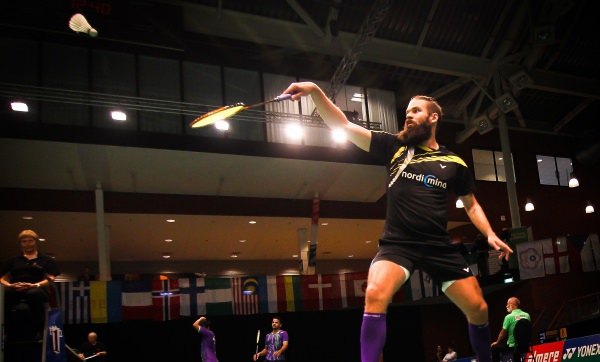 While the Scottish Open Grand Prix takes place in Glasgow this week the Badminton Europe circuit continues its journey around Europe with a stop off in Finland for the International Series rated Finnish International.

All the top home grown talent will be on show including last week’s Norwegian International winners Kalle Koljonen, Anton Kaisti and Jenny Nystrom. The biggest news however is the anticipated return of Finland’s most colourful player Ville Lang as the bearded enigma makes his return after a 6 months’ absence from the sport.

We have not seen Lang lift a racket since the European Championships back at the end of April where he crashed out in the opening round a defeat which also ended his Olympic campaign in disappointment. In typical Ville Lang style, he will return with a bang and not only play his customary men’s singles but will also line out in men’s doubles and mixed doubles.

Finland will have a strong chance lifting gold across all five disciplines and with Eetu and Iikka Heina, Kasper Lehikoinen, Kaisti and Koljonen in men’s singles there are chances a plenty for success. Nanna Vainio and Airi Mikkela head up the women’s singles challenge as the top two seeds and Finland also have the top seeds in the men’s doubles in the form of Aarnio and Heino.

There is also a top travelling contingent given the Scottish Open is on the same week with players of the calibre of Viktor Svendsen, Sofie Holmboe Dahl and Julie Dawall Jakobsen (DEN) line out in men’s and women’s singles and Moren and Szkudlarczyk (POL) in the men’s doubles.

The action gets under way on Thursday and is hosted by top Finnish club, Helsingfors BC with the finals scheduled for Sunday.

For all draws for the 2016 Finnish International click HERE