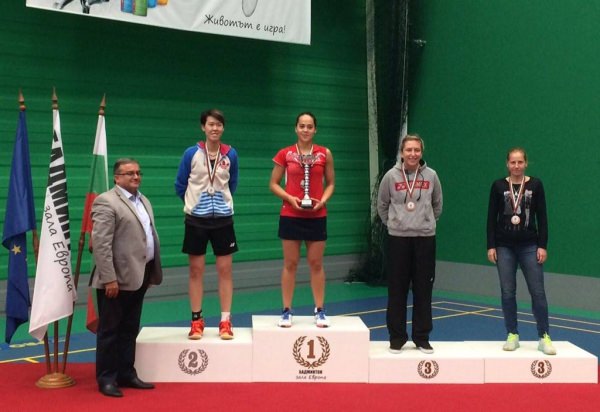 England’s Panuga Riou (pictured) went full circle today in Sofia by winning the women’s singles at the Bulgarian International. The 24-year-old had set the circuit alight in 2013 & 2014 winning in Slovakia and Poland but had her future turned on its head after a series of injuries put her career in doubt.

After coming back not once but twice from injury the plucky English shuttler today put all those injury woes behind her taking her rightful spot on top of the podium in Bulgaria. Riou was really only tested in her three game semi-final win over top Alesia Zaitsava, the only set she dropped the whole tournament.

In today’s final the English women beat Lydia Yi Yu Cheah in two games, a victory richly deserved after a tortuous two years. Riou’s return is not only a boost personally for the player but also for team England who are lacking depth in the women’s singles and Riou will be a welcomed addition to the squad this coming season.

While Riou’s return takes the headlines there was double wins for both Fatma Nur Yavuz or Turkey and Daniel Nikolov of Bulgaria. The Turk teamed up with Melih Turgut to lift the opening title of the day, the mixed doubles before closing out finals day with victory in the women’s doubles Busra Yalcinkaya.

While Yavuz celebrated her second win it was the second defeat of the day for Lydia Yi YU Cheah wo came up short in both the singles and doubles.

Nikolov took the men’s doubles title as top seed alongside Ivan Rusev which was to be expected. A little more unexpected was his victory in the men’s singles. The Bulgarian was seeded six for the singles but his two games win over top seed Matthew Carder of Scotland in the semi-final was evidence of his form.

Another Scot fell to the Bulgarians sword in today’s final as Nikolov beat Ben Torrance in two games to lift the title on home soil.