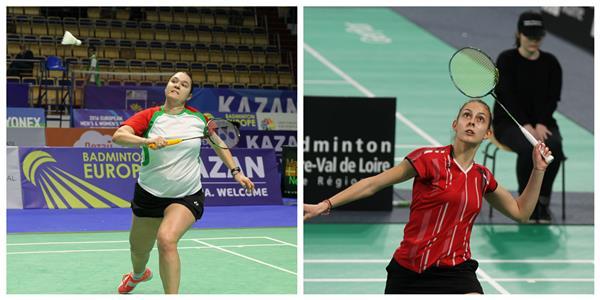 The Hellas International came to a conclusion today with team Bulgaria walking away with a clean sweep of all five gold medals. In addition to the clean sweep there were double golds for Mariya Mitsova, Petya Nedelcheva and Ivan Rusev who beat top seed Kim Bruun in the men’s singles final.

Mitsova opened her account taking the women’s singles again in two straight games beating French player Olivia Meunier in just 20 minutes 21-7 21-9. The Bulgaria beauty dropped just a total of 62 points across four matches on her way to the title which serves as an indication to her dominance this week in Greece.

Mitsova then teamed up with Nedelcheva to win the women’s doubles crown again in two games. Four matches played and just 54 points against highlighted the unseeded Bulgarians dominance in what was a stroll in the park week for the pair who helped Bulgaria to European silver a few short months ago in Kazan.

In what was the biggest upset of the Day Ivan Rusev beat hot favourite and winner in Greece just 2 months ago, Kim Bruun of Denmark. The Dane took the opening game 21-6 and looked on course for the Greek doubles but Rusev came back strongly to win in three with a 21-19 win in the deciding set.

Rusev completed the double in the final match of the day partnering Daniel Nikolov to the men’s doubles title marking the clean sweep for Bulgaria and with it a hat trick of double titles as an added bonus.