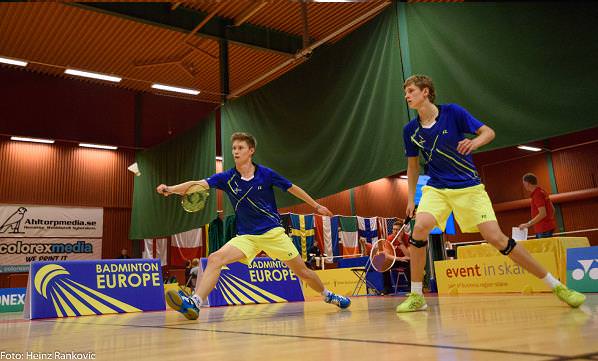 A really strong field with participants from 13 countries took part in Sweden’s first BEC U17 tournament; 2016 Swedish Skånska International. At Sunday’s semifinal matches, Denmark had 14 participants out of 20 possible, which once again shows their dominance in the youth elite.

From a Swedish point of view, the results were very satisfiying. The men’s double of Johan Azelius and Melker Z Bexell won the tournament by beating Danish couple Klinggaard Andersen/Sunekaer Bertelsen, 21-12 , 21-16 in the final. Azelius even went to the semifinals in men’s singles, as well.

Men’s singles title was won by the 5th seeded Lukas Resch from Germany. Resch played safely throughout the whole tournament and it was only in the final where he met the Danish 1st seeded Nicolas Wolf, that it becane a challenge. But Resch took home the final with the score: 21-14 , 14-21 , 21-18.

A category that deserves extra highlighting is the women’s singles, where it was all Danes inat the semifinals’ stage. When Clara Graversen played against Cecilie Amalie Kudsk it ended 21-12, 18-21, 22-20. While the match between Mathilde Cramer and Sophia Grundtvig lasted for one hour and 15 minutes, ended 22-24, 21-19, 21-12. They were two fantastic and well-played semifinals.

And for the final, Cramer against Graversen, Cramer found herself as the winner after taking the match in only two sets: 21-14, 21-15.

In the all Danish women’s doubles final, Christina and Amalie had to give in after 53 minutes, and the most even match of the day, against Line Christophersen and Malene Kaesler, 18-21, 21-18, 19-21.

One of the most even and well-played matches was the all-Danish mixed doubles final between: Muurholm Mads Petersen/Christine Busch Andreasen and Daniel Lundgaard/Malene Kaeseler. The result, 21-15, 19-21, 21-15, concluded the final session of the day.

In addition to the BEC U17 tournament, International team matches between six countries in the age groups of U-13, U-15 and U-17, were conducted with Denmark as the winner in each group.

Furthermore, U-13, U-15, and U-19 individual tournaments were also being organized with a the strong field from all over Europe. Leaving a total of 1022 matches in four days.

The Swedish Badminton Association are looking forward to welcome all the participants back to the event next year, though under a different tournament name; Swedish Youth Games 2017.