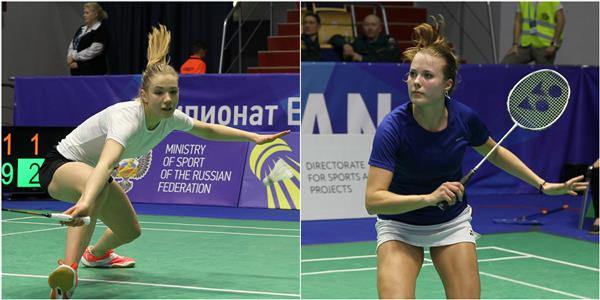 The battle for points in the few remaining tournaments in the race to Rio intensifies this week with one of the most interesting battles set to go down to the wire. While the Russian race in women’s singles seems to have taken a turn in favour of Ksenia Polikarpova who has pushed ahead of Natalia Perminova in the rankings the battle between Nanna Vainio and Airi Mikkela (pictured) will be taken to a new level on home soil this coming week in Vantaa, Finland.

Mikkela currently holds the one available spot by virtue of a slim 600 points, which can easily be overturned in a single tournament. But with time running out the pressure builds on both as Mikkela digs deep to hold on and Vainio continues the relentless quest for a performance to replicate her run to the semi-final in Sweden back in January.

To do it Vainio will have to come through a very difficult top half of the draw where she will play Mette Poulsen of Denmark in the opening round. Poulsen had a good few days in Orleans last week and seems to be finding a vein of form. Should Vainio make it through her opening match top seed Karin Schnaase awaits, Schnaase of course beat Vainio in the semi-final in Uppsala in January.

Schnaase herself will be in determined mood as she continues to defend off pressure from Olga Konon for her Rio swansong as a result will be in no mood for favours in Vantaa.

Mikkela will benefit from a week off last week after a crazy schedule that took her half way around the world over the past weeks. But like Vainio the draw has been less than helpful with an opening match against Thi Trang Vu of Vietnam with either Chloe Magee (IRL), herself searching for Rio points, or Danish young gun Sofie HolmboeDahl in round 2.

Both Finnish girls will have a difficult task this week and as well as the on court pressure there will be the usual off court demands that go with playing on home turf. One thing is for sure that both girls will continue to fight the good fight with integrity as they have done over the course of the entire Olympic campaign.

In the men’s singles Ville Lang hovers dangerously on the edge of Olympic qualification but in a twisted way it is this kind of situation that makes Lang tick. Lang revels under pressure and this week will be no different. After an injury disrupted month can Lang pull one out of the bag? Of course he can but it would be as much of a surprise to him this week with a quality field in Vantaa.

Fladberg & Holst are the form players after their all Danish final in Orleans last week but as Lansac and Rouxel proved it can sometimes be very difficult to replicate top form in back to back weeks. Petr Koukal was unlucky not to get to at least a semi final in Orleans last week and if the Czech Olympian is to pass out Milan Ludik in the race to Rio a semi final somewhere along the line may be needed. One thing all athletes in the men’s singles will have in common is that Anders Antonsen has withdrawn which opens up a route to the podium. 2015 was a lean tournament for Denmark in Finland with not a single winner in the five events. This year it is hard to look beyond anything but a win in the mixed doubles as Denmark send a strong team to the Helsinki suburb.

Mathias Christiansen and Lena Grebak have tasted success before in Finland and coming off the back of wonderful win in Orleans the Danes will be one of the fancied pairs. Add into the mix European Games gold medal winners Niclas Nohr and Sara Thygesen (pictured on the podium in Baku), it would be foolish to bet against Denmark. Can any other country trouble the Danes? Yes, both Russia and The Netherlands have the pairs to make the Danes work for victory. Barning & Tabeling were runners up to Christiansen and Grebak last week while Dimova and Dremin are always a threat at International Challenge level.

In the women’s doubles Barning/Tabeling (NED) and Thygesen/Fruergaard (DEN) will be tipped for gold while in the men’s doubles pick from any one of 6 pairs for the title with Cwalina/Wacha (POL), Daugaard/Christiansen (DEN), Nohr/Antonsen (DEN) and Nottingham/Towler (ENG) the likely favourites to lift the title come Sunday.

To view all draws for the 2016 Finnish Open click HERE