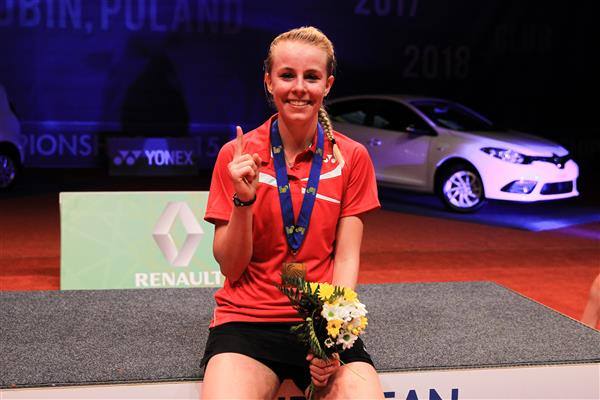 In terms of tournament results the past twelve months has been a somewhat topsy-turvy period for the current European Junior Champion, Mia Blichfeldt of Denmark. The 18-year-old from Solrod Strand put right some of those wrongs today in Caldas Da Rainha lifting the Portuguese International beating England’s Chloe Birch in the final in two games.

Blichfeldt took down top seed Chloe Magee in the quarter finals in three games and gained the self-belief to go on and win the tournament in what can be described as an overdue win for the talented teenager.

"I have been fighting for a victory in a while so I’m very happy for this tournament victory! Mentally it have been some tough months with injuries and down periods, so I’m just happy and pleased that I can play without pain! That’s the best part of all"

Birch herself had a fantastic run to both the singles and doubles finals but came unstuck in both as alongside Sarah Walker came up short against Yea Ching Goh and Yen Wei Peck from Malaysia in the women’s doubles final.

Malaysia also walked away with the men’s doubles title thanks to Yew Sing Ong and Ee Yi Teo in one of the very rare occasions in this Olympic year that the Badminton Europe circuit has been graced with strong Asian opposition.

Denmark also had success in the mixed doubles coming from one of the more unlikeliest combinations with Mikkel Mikkelsen teaming up with Mia Surrow to lift the Portuguese title.

The Danish pair were taken to three games in today’s final by Vietnamese pair Tuan Duc Do and Mhu Thao Pham with the Danes coming out on top in the third 21-19 after three very close sets.

In the men’s singles Gabriel Ulldahl’s run from qualification came to an abrupt end in the final where Sri Lanka’s Niluka Karunaratne got his Olympic dream back on track with a two game win over the Swede in the final.

Ulldahl had played another Karunaratne sibling in the semi-final beating Dinuka in three games but the Swedes luck ran out in today’s final after an excellent week from the undoubtedly talented Ulldahl.

The Karunaratne siblings can both be satisfied with their weeks work in Portugal as both try and come from behind to qualify for the Rio Olympics. The Sri Lankan pair were late starters in the race to Rio after some political turmoil at home prevented them from playing the first half of the qualification period.

It will be a tough fight to the finish with Niluka now looking the most likely of the Sri Lankan pair to make Rio but will take at least another win like today in Portugal to really make the Olympic dream a reality.