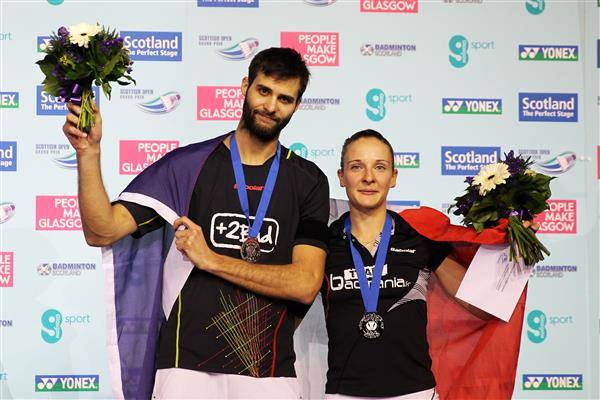 French pair Ronan Labar & Emilie Lefel make the journey south to Cardiff this week from Scotland as they hunt for further Olympic qualification points on the Road to Rio. The French will be the hot favourites to lift the mixed title in Cardiff after their run to the final of the Scottish Open GP and all in the wake of the Paris atrocities the previous week.

On the podium in Scotland the French draped the French flag around their shoulders (pictured) and the emotion of the moment was almost too much to bear for Emilie Lefel as she was visibly close to tears. This week in Cardiff we can expect to see the French channelling those emotions towards victory come Saturday.

The French have a reasonable draw and should not be tested until the quarter final where they will likely come up against improving German pair Kaesbauer and Volkmann or the new English duo Coles and Williams.

In the bottom half of the draw the Magee’s of Ireland are seeded two and really need something to start happening if they are to push towards Rio. There were glimpses of a return to form for the siblings in Scotland last week reaching the quarter final and in touch of a semi-final leading 19-18 in the deciding game against Mittelheisser and Fontaine of France. This week the French have withdrawn from the Welsh International from the same side of the draw as the Irish which makes life easier. However, the Magee’s will not be looking beyond a potential a first round banana skin match against Lee & Lee of Taipei.

Stoeva’s to bounce back from Scottish defeat.

The Stoeva sisters from Bulgaria, as in the norm now in all events they play in around Europe, are the overwhelming favourites to win in Cardiff this week. The sisters lost out in their title defence in Glasgow last week and while a shock at the time it became apparent as the tournament went on that they were the only pair that even came close to beating eventual winners Fukushima & Hirota of Japan.

So no need to panic from the Stoeva camp and this week we would be foolish to expect anything other than a convincing march to the title form Europe’s top circuit playing pair.

English pairs Olver & Smith and Robertshaw & Brown will bring the fight to the Bulgarians while the returning Russians Bolotova & Kosetskaya will be fresh and ready to mount a charge.

In the men’s doubles Ellis and Mills will look to continue their good form from Scotland while Langridge & Ellis will also feature heavily in the medals come Saturday.

An open book in singles events.

The men’s singles is an open book this week in Wales. Russia’s Vladimir Malkov is the top seed but will need to improve on recent up and down form if he is to win this coming week. Ukrainian fourth seed Dmytro Zavadsky has an interesting first round game against Pedro Martins of Portugal and the winner will go a long way into the tournament.

Indian Anand Pawar will possibly hold all the cards when dealing out the medals on Saturday but a lot will depend on how match sharp he is as the Indian slips back into tournament life on the road.

In the women’s singles there are a handful of names that jump out from the draw. Corrales as top seed and defending champion will once again be the one to beat but her heavy defeat to Line Kjaersfeldt in Scotland last week maybe an indication of her form.

German pair Schnasse and Konon will have a say come Saturday. Schnasse is still struggling with a niggling injury while Konon’s defeat to Kjaersfeldt last week was, in hindsight, a match that the German can take solace in as she and Kirsty Gilmour were the only ones to trouble the Dane on her run to the title in Glasgow.

Anna Thea Madsen will be another to watch this coming week after showing impressive form last week. In a tough top half of the draw it will come down to who wants it most in a battle between Corrales, Konon & Madsen as only one of these names will make the semi-final.

Article and Image by Mark Phelan for Badminton Europe.