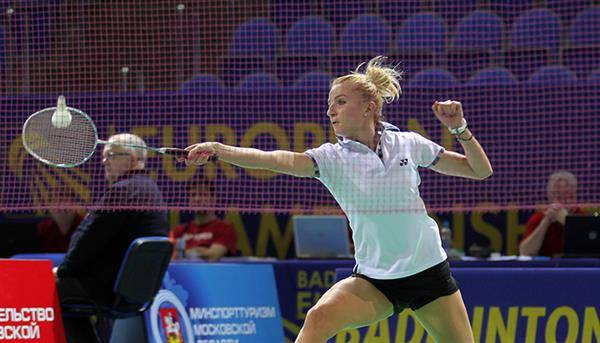 The Badminton Europe circuit moves to Budapest this coming week for the 40th edition of the Hungarian International. Home hopes will be pinned squarely on the shoulders of Laura Sarosi (pictured) as top seed in the women’s singles.

Sarosi, fresh from her win in Brazil last week, will look to bring that form back to the western Budapest suburb of Budaors this week and lift the title on home soil, something no Hungarian athlete has managed to do in the modern era.

Sarosi gets her campaign underway against young Croatian player Katarina Galenic and given the luck of the draw and her ever improving status within the women’s singles game, the Hungarian will be the one to beat this coming week.

The main threat to a home women’s singles victory is likely to come from the trio of young Danes making the trip to Budapest with Andersen, Boje and the ever improving Sophie Holmboe Dahl likely to apply some pressure.

England’s Chloe Birch and Germany’s Luise Heim will also feature heavily however a meeting between the pair as early as round two will dictate who brings the fight to Sarosi from the top half of the draw.

Durkinjak is back with a renewed focus.

Zvonimir Durkinjak is back but not to defend his men’s doubles title he won alongside Zvonimir Hoelbing in 2014. The Croatian has a slightly different ambitions this week as he attempts to qualify for the Rio Olympics so singles becomes the priority

Durkinjak has showed glimpses of real class this season, with his trip to the final in Prague being a highlight to date. The Croatian is seeded 6 this week and will be everyone’s outside bet to lift the title.

Scotland’s Kieran Merrilees returns after some time away and from the top half of the draw Finland’s Kalle Koljonen is not far away from putting 5 wins together to lift a circuit title.

With no fewer than 10 pairs in the main draw of the mixed doubles Denmark are effectively a shoe in to lift the title. Of the 10 pairs is there anyone to stop Denmark’s march to the title? Finland might have a say in that argument with Aarnio and Nystrom while top seeded Swedes Wengberg and Myhren have the armoury to beat the complete field on any given day.

Danish women’s doubles top seeds Sentow and Moller should have what it takes to control the top half of the draw and sweep to the final while in the bottom half Pekkola and Nystrom will be the ones to watch coming from the pack. As in the mixed doubles there are a handful to classy Danish pairs on the hunt for honours and the Boje sisters look to be a promising prospect while the Lundgaard/Van Zanne combination is a nice mixture of youthful exuberance and experience.

Campbell and MacHugh top the seedings for Scotland in the men’s doubles but like the other doubles events there are a host of Danes waiting to take the Scots down. Luckily for the Scots most of the Danish pairs are in the bottom half of the draw along with Tabeling and Jille from The Netherlands, a pair that might catch them all off guard on any given day.

All the action kicks off on Thursday in Budapest with qualification rounds. Click HERE to view the full draw for this the 40th edition of the Hungarian International.