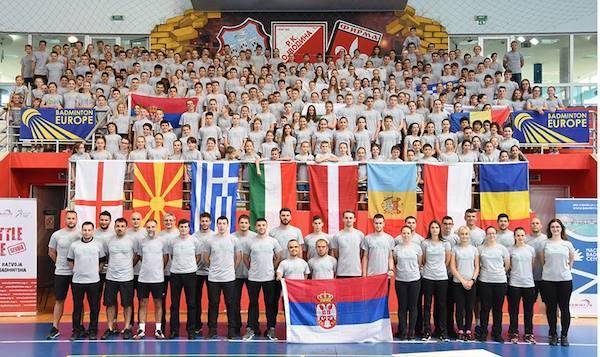 Yet another badminton spectacle in the city of Novi Sad. Capital city of Vojvodina Region and the second largest city in Serbia hosted more than 500 participants from 18 European countries: Russia, England, Austria, Ukraine, Cyprus, Poland, Slovenia, Latvia, Slovakia, Czech Republic, Hungary, Moldova, Greece, Croatia, Bulgaria, FYR Macedonia, Romania and Serbia. Serbian Team won a total of seven medals and claimed the title of the most successful team of Serbian U17 International tournament in front of Team Russia and Team Ukraine, each winning a total of five medals. Mihajlo Tomic from Serbia was awarded with the title of tournament MVP. He has won a gold medal in MD with Sergej Lukic and two silver medals, in MS and in XD with Marija Sudimac.

— I am truly happy and excited because of my achievements on this tournament, especially with a silver medal in MS because of the fact that I have started the competition as reserve and not knowing that I have been promoted to main draw during the technical meeting after several players made their withdrawals. In the end I have managed to reach the finals and win a silver medal. In MD Sergej Lukic and I have only confirmed the expectations of our coaching staff. The final match was exhausting, the gold medal was won after three very hard games and therefore I would like to thank and congratulate the players Jan Janostik and Adam Ehm form Czech Republic for their effort and sportsmanship. In XD with Marija Sudimac, we gave our best in the final match but a loss of focus when it was really important prevented us from claiming the gold medal. I have to say that I did not expect to win the MVP title. This means a lot to me in terms of motivation, Mihajlo Tomic stated after the medal ceremony.

The organizers did their best to provide entertainment both on and off the courts. A lot of good matches and a majority of the matches on both tournaments, especially during Saturday and Sunday recorded three games.

This year’s Youth tournament was the record breaker with 187 players in 15 events and a total of 379 matches. It started on Thursday, June 14 and was played along with the U17 BEC Circuit tournament.