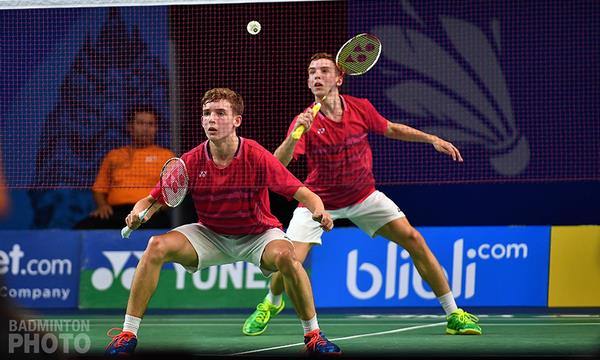 Christopher and Matthew Grimley started the new season in style this weekend, winning the men’s doubles at the Bulgarian Junior International.

The Young Scots needed only 28 minutes to see off the challenge of Russia’s Georgii Karpov and Georgii Lebedev today, beating the eighth seeds 21-12 21-11.

Though Matthew justified his No. 11 seeding in the singles by reaching the round of last-16 before bowing out to Marc Cardona, Christopher suffered a first round exit in the singles.

But they were dominant in the doubles, reaching the final without dropping a game with victories over pairs from Austria, Israel, Turkey and Denmark and speaking after they collected their medals, Christopher admitted that victory in the doubles had somewhat made up for a disappointing singles campaign.

"I’m still disappointed with the singles result but it was good to make up for it and win the doubles. We haven’t played much doubles  together recently so it was good to get a win."

Matthew continued: "I’m happy to be back playing competitions after a while out with my knee injury.

"We expected to do quite well in this competition as some of the top players weren’t playing but there were still a few strong couples such as the Danish and Russians that we had to watch out for."

Both immediately turned their attention to some big events in the coming months which include the European Junior Championships in September, the World Juniors in November and, for Christopher, the Youth Olympics in October.

"Our main goal is to medal at the European Junior Championships in Estonia" said Matthew.

Christopher agreed, saying "We want to medal at the Europeans and compete with the top players at the World Juniors. I also want to do well at the Youth Olympics."

Alice Campbell and Rachel Sugden reached the quarter-finals of the women’s doubles in Bulgaria before suffering defeat to top seeds Amalie Magalund and Freja Ravn of Denmark.

Campbell had lost in the first round of the singles but Sugden almost caused a major upset in the second round, coming within a whisker of toppling top seed Maria Delcheva but ultimately going out to a 16-21 21-13 24-22 defeat.

Find all the results from the tournament here