Are Karlsson/Magnusson able to defend their title?

Are Karlsson/Magnusson able to defend their title? 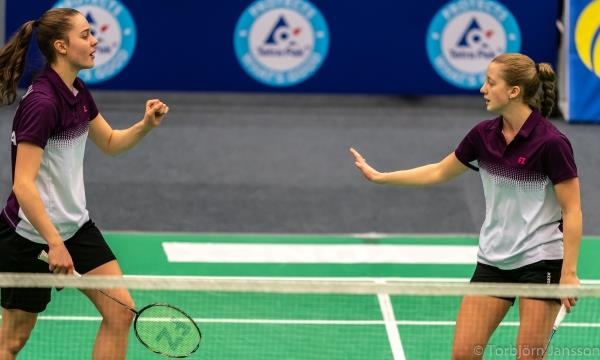 On Day 3 in Lund, Emma Karlsson and Johanna Magnusson were able to reach the final of the RSL Swedish Open. Now, they have the chance to repeat their success from last year.

21-8, 14-21 and 21-19 – that is the final result for Emma Karlsson and Johanna Magnusson, who had to face Julie Finne-Ipsen and Claudia Paredes, from Denmark, in the semi-final of the RSL Swedish Open 2019.

— The first game was good for us. Then, we lost the second one, but managed to come back strong in the last game. It was a relief to win in the end, Karlsson said after the match.

The European Junior Champions from 2017 were the only Swedes left in the semi-finals in Lund. As the defending champion and seeded number one pair, the Swedes feel a lot of pressure by playing on home soil.

— It helped a lot to have the support from the spectators here at home. But at the same time, we were also nervous and pressured to perform well, Magnusson said.

— We have high ambitions here, this is why we are pressuring ourselves a lot, Karlsson added.

Tomorrow, the Swedish pair is facing Amalie Magelund and Freja Ravn from Denmark in the final of the tournament. So far, both pairs already played against each other twice – and won one match each.

You can watch all matches live and find the interviews and highlights at the final day of the RSL Swedish Open 2019 in the ‘Badminton Live’ app.