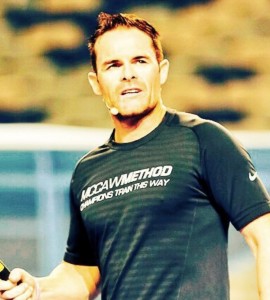 The Badminton World Federation (BWF) has secured a star-studded panel of experts to headline the BWF World Coaching Conference 2019 to be held in Basel, Switzerland, on 22-23 August.

Among them is world-renowned sports performance consultant and mindset coach, Allistair McCaw. Allistair has worked with numerous Olympians, Paralympians, world champions and 11 Grand Slam tennis champions over the past 24 years and said he is excited to share his knowledge and experience with the badminton community.

“This is going to be one of the highlights of my year and I can’t wait to get to Basel to meet some of the badminton coaches and share some amazing information with them,” McCaw said.

Lars Uhre (featured image) is one of the most accomplished badminton coaches globally, having worked with the Danish, Finnish, Dutch and New Zealand national teams, as well as being head coach of the International Badminton Academy.

The Dane will be one of the main experts leading the badminton-specific sessions and said peer-to-peer coaching is essential for the progression of elite badminton players.

“I am looking forward to working with other high-performance coaches and hopefully being able to inspire them in their work with top-class players,” he said.

Chair of BWF Development and Sport for All Committee, David Cabello, said the BWF had invested considerable time and effort in raising the standard of coaching within the sport.

“The pedigree of the individual speakers is a testament to BWF’s commitment to producing well informed, educated and talented coaches throughout the badminton system,” he said.

“We’re very pleased to have secured the services of Allistair (left) and Lars we look forward to our coaches gathering together in Basel, Switzerland, in seven months’ time.”

Also on the panel is Director of Sport at the British Paralympic Association (BPA), Penny Briscoe OBE. Briscoe was Chef de Mission of the Great Britain Paralympic teams at Sochi 2014, Rio 2016 and PyeongChang 2018 and will again assume that duty at Tokyo 2020. Before joining the BPA she was Senior National Coach at British Canoeing for Atlanta 1996 and Sydney 2000 Olympic Games.

She has been instrumental in supporting the achievement of British Para sports athletes to challenge perceptions and break down barriers and is a leading voice in the development of Para sport and Great Britain’s success at the Paralympic Games.

Further guest speakers will be announced in the coming months. You can register your interest to attend the BWF World Coaching Conference 2019 here.