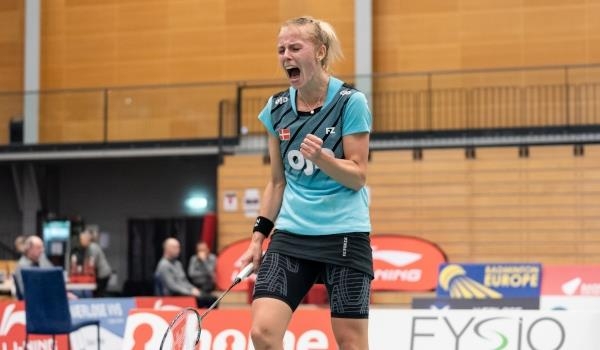 Yesterday, the LI-NING Denmark Challenge 2019 came to an end with European winners in both singles categories as well as in the Mixed Doubles.

Mia Blichfeldt had to come through a strong match against her Japanese opponent Natsuki Oie who beat Line Kjærsfeldt in the semi-finals.

The young Dane spoke to Badminton Europe about the challenges that she faced against Oie and the tournament schedule for a challenge tournament.

— It was a tough match and I had very tired legs, so I fought it all the way to the win, Blichfeldt said.

— There are more matches in a few days, so it is mentally and physically harder, so I needed to prepare properly for each match, the 21-year-old added.

Vittinghus controlled the majority of the match at his speed and won to seal his first challenge tournament title.

— I am very happy but also extremely tired. It is a tough schedule, to play five matches in three days and especially against players of this level, he said.

— The quality of this event was really high, and I did not get anything for free, I had to work hard in all my matches.

Ronan Labar/Anne Tran won the Mixed Doubles match against their fellow French opponents, Thom Gicquel/Delphine Delrue, in a tight match with three games. You can read the feature here.

Close but no cigar for England

England had two pairs in with a shout of the title. Lauren Smith/Chloe Birch in the Women’s Doubles, whilst Ben Lane/Sean Vendy had a chance to win the Men’s Doubles.

Both came through tough matches on Saturday and were in a final, which exceeded their expectations, but they were unable to maintain the level set in the semi-finals. The two pairs lost in straight games.

You can watch all the interviews here