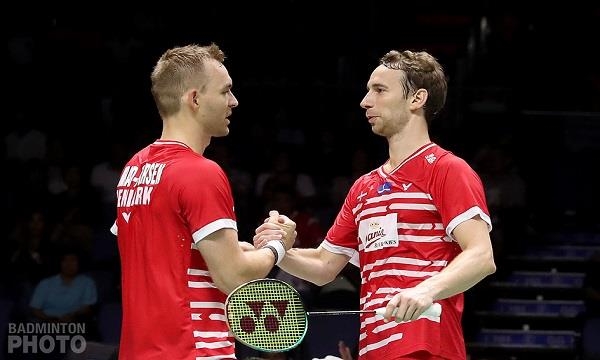 This year’s Spanish International in Madrid had the added interest for fans as it had the first return to court of new partnership Mathias Boe and Mads Conrad-Peterson.

Having to go through qualification, something that both Boe and Conad-Peterson would not have had to do for many years, started a long week in Madrid. In addition, in the second round they faced another new pairing in the familiar face of Tan Boon Heong of Malaysia, who partnered young prospect Shia Chun Kang. It was an entertaining but assured two game victory, as was their route to the final.

Yesterday in the final, they faced a fellow Danish pair, Joel Eipe and Rasmus Kjaer, who also started their week in the qualifications. Again, it was an impressively straight forward two game victory, 21-11, 21-10. Boe and Conrad-Petersen will now travel across the Atlantic for the Canadian Open, where they will have a bigger test of their form.

New kid on the block
Kunlavut Vitidsarn is a name to note down. The double World Junior Champion has taken flight in Europe and this week turned on the style in Madrid. The 18-year-old from Bangkok won the title without dropping a game. Beating England’s Toby Penty 21-14, 21-14 in the final, and threw in a handful of trick shots for the crowd. A promising young player to get excited about.