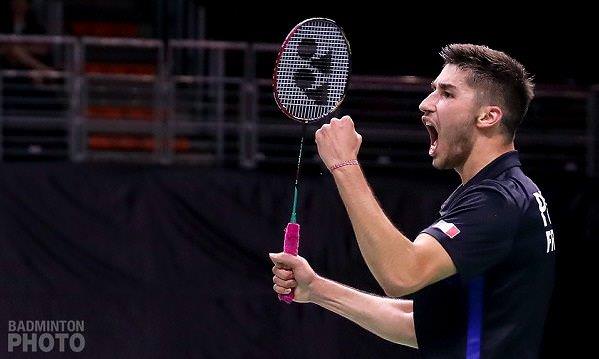 The final matches have been played this afternoon at the AIG FZ FORZA Irish Open 2019, in Dublin.

Toma Junior Popov has won the men’s singles title at the Irish Open after a two game match against Spain’s Pablo Abian. Popov, who was seeded number eight at this tournament, beat his number four seeded opponent: 21-10, 24-22. Popov secured a spot in the final the previous day, after he had won a three game thriller against England’s Toby Penty: 21-18, 22-24, 10-21.

The men’s singles medal isn’t the only one for France. In the women’s singles, number four seeded Qi Xuefei beat her Danish opponent, Julie Dawall Jakobsen, in two straight games 21-15,21-12. Qi Xuefei displayed a flawless performance at the Irish Open, after not losing any games throughout the tournament.

France, however, wasn’t as lucky in the other finals. In the mixed doubles, the number three seeded pair Ronan Labar/ Anne Tran lost against their Danish rivals Mathias Christiansen/Alexandra Bøje in two games:  12-21, 19-21;

The French have lost again to the Danes in the women’s doubles. The unseeded pair, Amalie Magelund /Freja Ravn were victorious over the number two seeded pair Delphine Delrue/Lea Palermo, in straight games: 21-18, 21-11;

The men’s doubles final turned out to be a three game fight between the number two and number three seeded pairs, Scotland’s Alexander Dunn/Adam Hall and Germany’s Jones Ralfy Jansen/Peter Kaesbauer. The Germans ended up defeating their adversaries, 21-19, 17-21, 21-18, after playing for 61 minutes.

To see the results of the Irish Open 2019, click here.