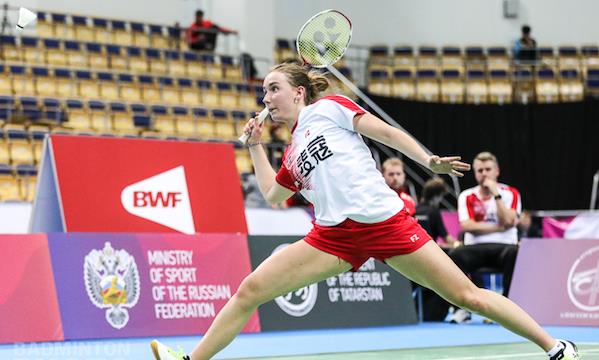 The VICTOR Slovenia Future Series 2019 was played last week and yesterday the winners were found.

In the men’s singles it was the Danish Karan Rajan Rajarajan against Czech Republic’s Jan Louda. Rajarajan won the first game 21-17, but Louda came back stronger in the second game sending the match into a third game after winning 21-11. The Dane secured the gold medal and the title after winning 21-19 in a close last game.

Jenjira Stadelmann from Switzerland and Monika Szoke from Hungary faced each other in the women’s singles final. The first game went to Stadelmann’, while the second game was in Szoke’s favour. Another match that went into the third game before finding a winner. Here the eight seeded Swiss managed to turn the match around again and got the last game. The match ended 21-18 13-21 21-15 to Jenjira Stadelmann.

Danish participation in all doubles

The men’s doubles was a match between the first seeded Jaromir Janacek and Tomas Svejda from Czech Republic and the unseeded Kristoffer Knudsen and Mouritz Troels Munk from Denmark. This match also went into three games, when Janacek and Svejda won the first game 21-18 and Knudsen and Munk then won the second 21-17. In the third game the Danes were never really close and Janacek and Svejda won 21-11 and secured a medal and title for Czech Republic.

Four Danish ladies played the women’s doubles making sure that Denmark would get at least another gold medal. Frederikke Lund and Signe Schulz were on one side of the net while Amalie Cecilie Kudsk and Elisa Meldgaard were on the other side. The first match that was won in two games as Lund and Schulz made a solid performance and won 21-15 21-11.

The mixed doubles was between the third seeded Miha Ivancic and Petra Polanc from Slovenia and Kristoffer Knudsen and Elisa Meldgaard, who both played the doubles, from Denmark. This was by far the fastest match as Ivancic and Polanc won the match in straight games in only twenty-five minutes. The result was 21-12 21-14.