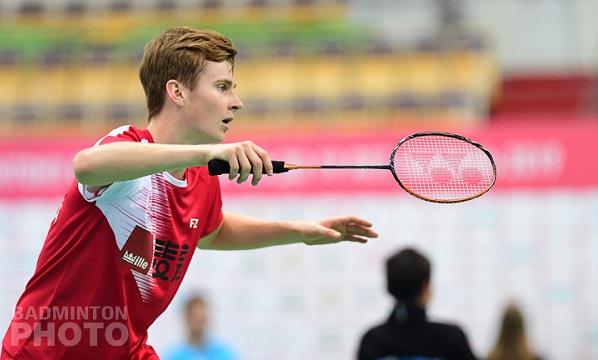 The first international tournament played since the All England Open took place in Pazardzhik, Bulgaria over the weekend. The Bulgarian Junior Open gave the European juniors a chance to test themselves in a tournament environment after a long time out.

The players before the tournament were looking forward to walking on court again to see if the practise they are putting in is paying off. One such player who was hoping for success in Bulgaria was Denmark’s Mads Juel Møller. The reigning U17 European Championship gold medallist in men’s singles and doubles delivered double gold again yesterday.

Møller, together with partner Jakob Houe, defeated the number one seeds from Spain, Gabriel Fernandez and Jacobo Fernandez, in the men’s doubles final, 21-16, 21-15. In the men’s singles, Møller managed to navigate his way to the final without dropping a game, where he then faced off against his doubles partner, Houe. Møller won the well-fought final, 21-17, 21-15.

Read: Stoevas: There is no mercy

Could not have been closer
Despite there being no crowd for the tournament, there was a home cheer for the mixed doubles, where Evgeni Panev and Tanya Ivanova took the gold for Bulgaria in a final that could not have been any closer, finishing 28-26, 23-21 against the Bulgarian-Czech combination of Gergana Pavlova and Martin Chumchal.

The Bulgarian women featuring in the final, Ivanova and Pavlova, just came up short in the women’s doubles final against the second-seed Spaniards, Lucia Rodriguez and Ania Setien, 21-12, 21-16.

In the only title decider to go the distance, the marathon women’s singles final was taken by Dounia Pelupessy of Switzerland, 22-20, 20-22, 21-18 against Spain’s Ania Setien.