What happened when live badminton returned?

What happened when live badminton returned? 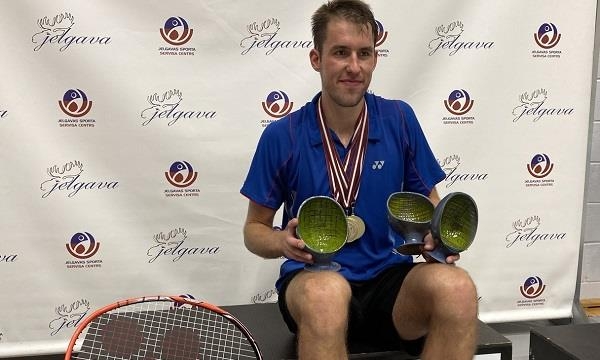 Live badminton returned with the Latvia International 2020 this weekend. Find out which player managed to win the treble.

Europe breathed a small sigh of relief with the return of live streaming to the badmintoneurope.tv platform. Players who could travel, were in Jelgava, Latvia last weekend and competed in the Latvia International 2020. There were many rules in the Zemgales Olimpiskais centrs to keep everyone safe, but the rules on court were the same ones we have missed so much.

All the Baltic nations were represented with Lithuania, Estonia and of course hosts Latvia. Players also came from Italy and Germany. However, it was the Estonian contingent who dominated in all categories. Out of the 20 available podium spots, 12 were filled by Estonians.

Read: BWF Events are back: Starting with three major events in Denmark

Laanes treble
Laanes, 23, completed a perfect tournament treble in the maximum three categories. A sight rarely seen in modern badminton. Earlier this year, Laanes with his men’s doubles partner, Mikk Järveoja, reached the quarterfinals at their home Estonian International. In fact, defeating compatriots Karl Kert and Hans-Kristjan Pilve along the way. In Latvia, the final was an all Estonian affair, where Laanes/ Järveoja took on Kert again with his new partner Mihkel Talts. It was an entertaining three-game final ending 23-21, 15-21, 21-13.

In the men’s singles, Laanes was seeded number three and had to face his men’s doubles partner in the semifinal. Coming out victorious after a three-game battle, he faced Pilve in the final. Yet another tight three-game match ensued, with Laanes coming out on top 21-12, 18-21, 21-16.

In the mixed doubles, luckily for Laanes, things were a little simpler. Partnering with a ten-time women’s doubles title winner, Helina Rüütel, and with the number one seeds from Belgium, Van Nieuwkerke/ Jaques pulling out, they cruised to the title without dropping a game.

Kruus control
A surprise unseeded winner in the women’s singles was a player just shy of her seventeenth birthday, Catlyn Kruus. In 2018, Kruus won the Polish U17 International in singles, last year the Lithuanian Junior in women’s doubles, and now her first senior title. She had to overcome two strong Italian talents in Katherina Fink in the semifinal, winning the deciding game 21-15, and then Yasmine Hamza in the final, 21-15, 21-16.

In the women’s doubles, the reigning champions, Helina Rüütel and Kati-Kreet Marran did the business again with an efficient performance. They defeated the Italian duo of Fink and Hamza in the final 21-11, 21-12.