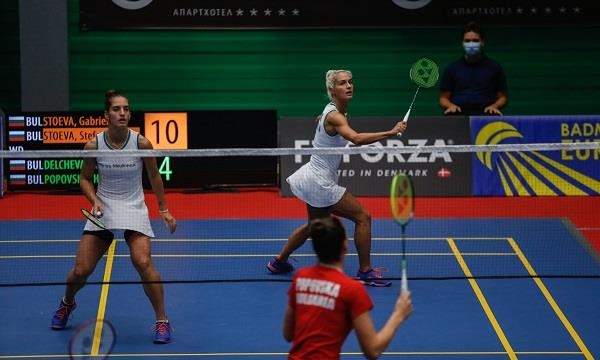 The Bulgarian International Championship 2020 successfully took place in Sofia over the weekend, with the Stoevas and Zetchiri impressing at home.

All of the players were very much looking forward to finally getting back on court and testing out their form. There was always a question mark around how well a player can perform first time out, but Stefani and Gabriela Stoeva looked very sharp, losing just a total 21 points in both their first two matches, booking their spot in the women’s doubles final against compatriots Maria Delcheva/ Hristomira Popovska.

Determined not to lose double figures in any game, the Stoevas eased to a 21-8, 21-9 victory and secured their sixth Bulgarian International title. After the win, the sisters posted the simple one-word post of ‘Champions’ with the hashtags, never give up, keep going and work hard play hard.

The second seed, Katerina Tomalova was hoping for a big tournament, although she came unstuck against the teenage Serb, Marija Sudimac, in her opening match. Despite recording a win against her at the Hellas Open last year, it went to a decider that this time ended 23-21 in favour of Sudimac.

The third seed also crashed out early, with Slovenia’s Petra Polanc losing out to local talent, Hristomira Popovska. The Bulgarian, in the tightest of opening games, managed to scrape a 30-28 win. After narrowly conceding the second game 21-19, Popovska was able to keep calm and progress to the semifinal with a 21-16 decider win.

Records were broken
In the men’s categories and mixed doubles, we saw unseeded players take the title. In the men’s singles, Croatia’s Luka Ban impressed with a strong dominant run all the way to his first senior title. He defeated Iliyan Stoynov in the final, 21-10, 21-15, and became the only non-Bulgarian champion this year.

In the men’s doubles, Daniel Nikolov and Ivan Rusev kept the title in Bulgaria for the first time since 1992, when Mihail Popov and Svetoslav Stoyanov were the victors. While Iliyan Stoynov and Hristomira Popovska took the mixed doubles title after the unfortunate withdrawal of the Slovenian number one seeds, Miha Ivancic and Petra Polanc.

Livestream
All of the matches were livestreamed for fans on badmintoneurope.tv. Take a look at the Stoeva sisters in action in the final: