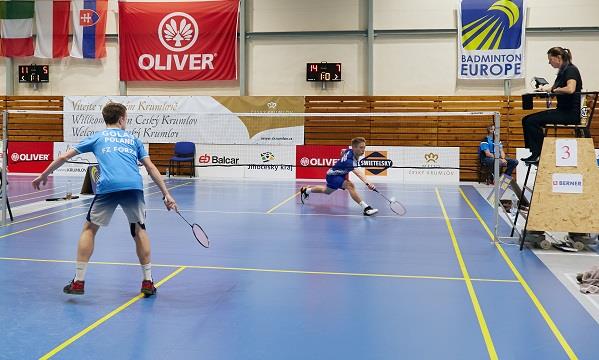 As fans come down from the high of the Denmark Open 2020, we look at the OLIVER U17 Czech International 2020 which successfully took place at the beginning of October.

When interviewing the senior stars in Odense, they were ecstatic about returning to the court. The up and coming young talents are no different and had the opportunity on 1-3 October. Established in 2017, by former player Pavel Florián, who had the idea while working at Badminton Europe, and his former coach Radek Votava, with the help of current player Tomas Švejda. They wanted a new way of running such a tournament and built one taking place in the beautiful and historic town of Český Krumlov.

There were 175 registered players keen to test their form in the Czech Republic this year. After 62 withdrawals, the tournament still went ahead strongly with representatives from the Czech Republic, Poland, Germany, Italy and Austria.

A lot of badminton was played, with 465 shuttles used in 172 matches. Tournament Director, Radek Votava, was delighted that the event, originally set for April, was able to go ahead this year. Keen to emphasise the team effort involved, he sends his thanks to everyone who made it possible.

— We would like to say big thank you to the Czech Badminton Federation for coming with us and thanks to them we were able to provide quality referees and umpires and a live stream. Thanks to the South Bohemian Region, which supported the event financially, and SK Badminton Český Krumlov partners which were headed by the town of Český Krumlov.

Read: Winning the Denmark Open with your friend by your side

A safe event
It almost goes without saying now, but the event followed strict policies in order to keep the players and staff safe during the event. Touching on some of the things that were implemented, Radek Votava explains.

— The hall had all the security measures in connection with Badminton Europe and the Czech government, such as ventilation, disinfection, played without spectators and with a minimum number of players and trainers in the hall, marking the places in the stands where players can be, wearing masks, including coaches on the courts.

— The important thing was to respect the rules and be considerate of each other. This was finally set up so that everything was good and the tournament could take place without any problems, he adds.

See you next year
Despite difficult times around the world and ongoing restrictions around the pandemic, badminton is gradually restarting the circuit. It may be some time before normality returns, but the Czech Republic wanted to play its part in making a positive statement.

— We said that it is necessary to do something, not wait and work on the arrangement and allow the players to return to the international circuit.

They are already looking forward to next year, when they welcome the U17 players from 8-10 April. With the final word, Radek Votava sends his wishes.

— Thank you very much to all for their participation, observance of all necessary safety rules and wish you good health and well-being in these difficult times.