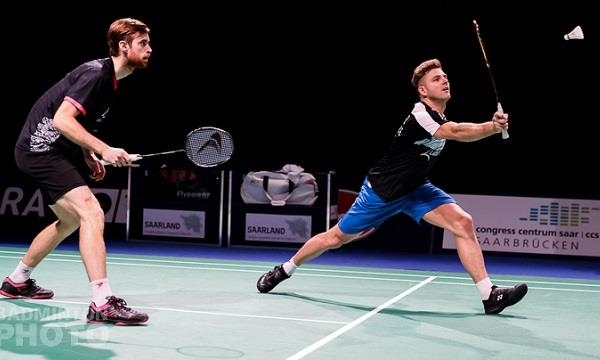 The 55 Portuguese International Championships 2020 took place in Caldas da Rainha, Portugal, last week, with many notable European names travelling under difficult conditions to play some competitive badminton before the year-end.

On the morning of yesterday’s final, three players had the opportunity for the double. Moreover, France and Scotland, who dominated the medals, had live chances in three finals each.

O’Donnell has already tasted title success when she won the women’s doubles at the Iceland International with Julie Macpherson last year. In Portugal, Grimley/ O’Donnell had a strong run to the final, defeating number one seeds from Poland, Pawel Smilowski/ Magdalena Swierczynska, in the semifinal.

Their opponents in the final were compatriots, Adam Pringle/ Rachel Andrew, who themselves had to defeat the Danish number two seeds, Emil Lauritzen/ Iben Bergstein, in round two, ending 23-21 in the decider.

The final started off level, with Grimley/ O’Donnell narrowly taking the opening game 21-18, only to then take off and secure the title 21-6 in the second.

Leverdez’s five-year wait
We had an all-French final in the European Junior Championships in Finland. This was mirrored in Portugal with Brice Leverdez and Lucas Corvee. The latter had an early scare against CoE player Milan Dratva, just scraping through 23-21, 22-20.

Both Leverdez and Corvee overcame tough semifinals against Spaniards Penalver and Abian respectively. The final itself was a dominant performance by Leverdez, 21-10, 21-12, which won the experienced Frenchman his first title since his 2015 Italian International win, where he defeated Marc Zwiebler, 26-24 in the decider.

Jaquet scores her third title win
Swiss singles player, Sabrina Jaquet, in her last two outings has had the displeasure of coming up against the tough opponent of Lianne Tan. This time, seeded number one, she was able to express herself and build a strong run all the way to the title, without dropping a game. Jaquet defeated seventh seed from France, Leonice Huet, 21-10, 21-11.

Read: Popov makes history and Shapovalova is back!

Second title for Scotland
The women’s doubles final was a Scottish-Irish clash between two unseeded pairs. Ireland’s Sara Boyle/ Rachael Darragh defeated O’Donnell/ Sidebottom in the semifinal after they, in turn, knocked out the number one seeds and home favourites Goncalves/ Goncalves in a match that ended 24-22 in the decider.

Middleton/ Newall quashed hopes of an all-Irish final when they defeated number two seeds Frost/ Ryan in the quarterfinals.

The final could not have been closer with the Scots leading most of the way through the first game, but were forced to go into settings to secure it 22-20. In the second game, Darragh/ Boyle came back from a 12-6 deficit to have game point at 23-22. However, Newall/ Middleton won the next three to clinch the title.

Leverdez/ Corvee and the seven-year gap
Fans know both Leverdez and Corvee from their singles careers, so it may be a surprise to many that they are now embarking on a doubles journey together. However, it is not their first time winning a doubles title. Back in 2013, the duo reached two finals. Runner-ups at the Swiss International, they then went on to win the Puerto Rico International against compatriots Laurent Contantin/ Matthieu Lo Ying Ping.

In yesterday’s final, they were up against the number one seeds from Scotland, Christopher and Matthew Grimley, who like Leverdez/ Corvee, had little trouble on their way to the final.

In the first game, the lead changed countless times, the young Scots had the first game point at 20-19, and then again at 22-21, but could not convert. Leverdez/ Corvee themselves lost three game points, before finally securely the game on the fourth attempt, 26-24.

The second game had the French pair leading most of the way, but the Grimley brothers were not going to make it easy, saving four match points, before the more experienced pair were able to get the win and title, 24-22 in the second.

All matches were streamed live and are still available to watch on badmintoneurope.tv