The winners in Portugal

The winners in Portugal 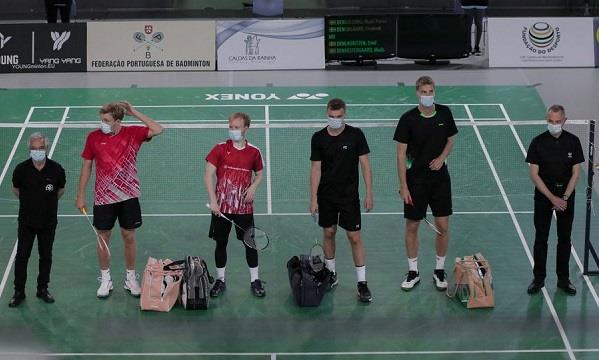 The 56 Portuguese International Championships 2021 reached its pinnacle yesterday and after a long week, the winners were crowned. Here is what happened.

Sarosi’s double
In an Olympic qualifying year, tough choices need to be made as to which tournaments to play and when. With time running out, Hungary’s Olympics hopeful Laura Sarosi made the call to not travel the short hop to Kyiv for the 2021 European Championships, a Super 500 event, but to travel to South America for the Peru International 2021.

Sarosi has been floating around the final qualification spots and was seeking to consolidate her position. The beginning of 2021 saw her squeak into the Swiss Open 2021 draw from the reserves due to Mitsova’s withdrawal. She narrowly lost to Line Højmark Kjaersfeldt in the first round. The Orleans Masters brought the same result, but to no other than the returning Mariya Mitsova.

The Peru International is an International Series tournament, but she came back with maximum points, winning the title without dropping a game. This form continued into the Portugal International for the fifth seed, making it all the way to the final without a fuss.

Against Marie Batomene of France, based on their previous matches, it was always going to be tight. In both games, Sarosi had to come from behind but managed to maintain her 100 per cent record of not dropping a game with a 21-19, 21-19 victory.

Another Danish name
At the 2021 European Championships, we saw Danes take three of the four medals up for grabs, flexing their strength and depth in men’s singles. Another name to take note of is Ditlev Jaeger Holm. In 2020, he reached the semifinal of the SaarLorLux Open and then this year he scored a quarterfinal at the Orleans Masters. Now he has sliced through the draw at the Portuguese International.

Holm, 23, faced Germany’s Max Weisskirchen in the final. A player who stopped his progress at the Austrian Open last year. The left-hander is developing into a consistent performer in Europe, as he dealt with Weisskirchen this time in two games, 21-15, 21-17.

On his social media, he was pleased about the tournament as a whole and his ‘five solid performances’.

Danish doubles
As was perhaps predicted, new pair Mads Pieler Kolding/ Frederik Søgaard who found themselves in qualification, stormed to the title. Playing a whopping seven matches in the process.

They had a brief scare in the semifinal when the young English pair of Rory Easton/ Zach Russ took the opening game, but it was all Denmark thereafter.

In the final, another new Danish pair, Emil Lauritzen playing with the recent European Junior champion Mads Vestergaard, applied some pressure. However, the experience came out on top, with Kolding/ Søgaard winning 21-17, 21-18.

In the women’s doubles, number one seed met number two seed in the final. Estonia’s Kati-Kreet Marran/ Helina Rüütel were top seeds against Danes Christine Busch/ Amalie Schulz, who had it all to do as they will have their three-game loss to their opponents at the All England Open 2021 on their mind.

Busch/ Schulz overturned the form book and delivered an impressive two-game win to take the title.

Hard work paid off for England
A new and exciting mixed doubles partnership from England is Callum Hemming/ Jessica Pugh. Both have previously won international titles with other partners. Hemming won two with Fee Teng Liew and Pugh was gaining a lot of attention through her seven titles with Ben Lane. Together they are now off the mark with a title win.

Both Hemming and Pugh played level doubles also. With Jessica Hopton, Pugh reached the semifinals, while Hemming matched this in the men’s doubles with Steven Stallwood.

In the final, they had their sternest test against France’s William Villeger/ Sharone Bauer. After two tight games each, it went to a decider. The English pair led most of the way, but it was at 17-15 that they made their sprint to the line. With four straight points, they secured the title. On social media, they wrote a simple message that underlined this victory.

-Lots of hard work for this one!