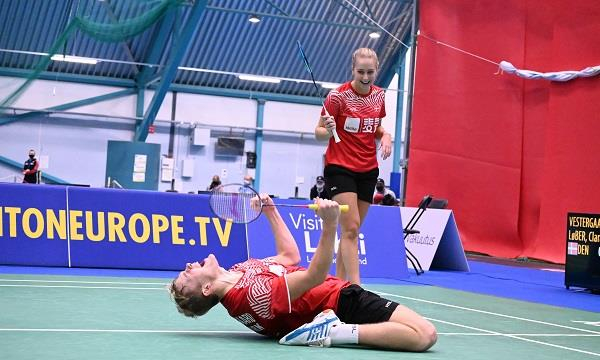 As we creep ever closer to the Olympics, badminton action continues in Kaunas for the Lithuanian International 2021 played 10-13 June. Many exciting talents will be on show. Read more in the tournament preview.

Men’s singles
Canada’s Indian-born B. R. Sankeerth, comes in as number one seed. The freshly crowned Pan Am Championships bronze medallist has won titles in North and South America and would love to get off the mark in Europe.

Danylo Bosniuk is at number two seed. The 20-year-old received a Wildcard for the 2021 European Championships in Kyiv in April and had the unforgettable high of winning a match on home soil. Now he is seeking his first senior title.


Centre of Excellence players, Moldovan Cristian Savin, 20, and Israeli Yonathan Levit, 23, are sixth and seventh seed respectively. Certainly, one to watch would be Denmark’s Magnus Johannesen. A lot is expected from this young talent. He has good memories from the Baltic region as in 2019 he reached the final of the Latvia International as a qualifier, this time in Lithuania he is seeded fifth.

Speaking of making it out of qualification, this is exactly what the young French talent, Alex Lanier, has had to do this year. The 16-year-old, who not long ago entered lycée (High School), not only managed to get out of the draw at the Slovenia International and Austrian but reached the quarterfinals. Will we see another deep run from one of the most exciting prospects in European badminton?

Women’s singles
The experienced Ksenia Polikarpova tops the seeding but has had a tough time getting her game going this year. Most recently she surpassed the challenge of Rachael Darragh in Kyiv, but then met the eventual European silver medallist, Line Christophersen in the round of 16.

India’s steady Malvika Bansod, 19, has come to Europe after her Uganda International win and impressed at the Austrian Open. Narrowly losing in three games in the quarterfinal to the eventual champion, Clara Azurmendi.

Goh Jin Wei is a name in the draw that caught the eye, however, sadly the Malaysia team have withdrawn all of their players. The super-talent, now 21, won the World Junior Championships in 2015, at just 15 years of age, and also in 2018, defeating Line Christophersen in the final. Goh also won gold at the 2018 Youth Olympic Games. The once world number 24 will need to wait a little longer for opportunities to bump up her ranking.

The 2019 European U17 Champion, Mariia Golubeva, bowed out in the quarterfinals at last years European Junior Championships. Recently turned 17, Golubeva navigated through qualification at the Slovenia International and then into the round of 16. It will be interesting to see how she fairs this week.

Men’s doubles
Fellow Baltic nation Estonia is coming in force to Lithuania in the men’s doubles. Kristjan Kaljurand/ Raul Käsner are top seeds. Kaljurand has won national titles in Estonia, two titles in neighbouring Latvia, so he would complete the Baltic set if winning on Lithuanian soil.

Emil Lauritzen/ Mads Vestergaard are in the early stages of their new partnership, and they have got off to a pleasing start. At the Portuguese International, they reached the final and pressured the more experienced Mads Pieler Kolding/ Frederik Søgaard in the final.

At the Spain Masters, they had an unlucky draw and met a talented Indonesian pair, Pramudya Kusumawardana/ Yeremia Erich Yoche Yacob Rambitan, who went onto win the title. In Austria, once again they met the eventual winners, Junaidi Arif/ Muhammad Haikal, in the quarterfinal but took them to three.

Women’s doubles
The most open category of the tournament, with many young players and new partnerships. There has been a switch-up in the French pairings. Tea Margueritte and Laeticia Jaffrennou have parted ways after tournaments in Portugal and Spain this year to partner Anna Tatranova and Anouk Nambot respectively.

The European Junior mixed doubles bronze medallist, Flavie Vallet, continues her partnership with Emilie Vercelot. Could the young French stars get off the mark in Lithuania? It would be the first time since 2015, when Marie Batomene/ Teshana Vignes Waran took the title.

Mixed doubles
The best chance for a home victory for Lithuania lies perhaps in the mixed doubles category. The last time they had a player at the top of the podium was eight years ago when Akvilė Stapušaitytė won the 2013 women’s singles.

Mark Sames/ Vytaute Fomkinaite are seeded second, but the last time they played together was in 2019, when they reached the quarterfinals of the Slovenia Future Series. However, many younger talents will be grabbing their opportunity to impress in Kaunas.

Namely, Mads Vestergaard/ Clara Løber who are reunited since their European Junior Championships in Finland. They were in the mix for the gold but came away without a medal. Although Løber took bronze in women’s doubles and Vestergaard won gold in the men’s doubles.

Since then, they have tried out new partners. Vestergaard saw the best results, with a Portuguese International semifinal and most recently an Austrian Open quarterfinal. Results that are good on paper, but perhaps visually left the spectator thinking that they were missed opportunities to go further. It will be fascinating to see how far this pair can go this week.

A Maltese-Finnish combination also jumps off the screen when browsing the draw. Matthew Abela, who is currently training at the Centre of Excellence, received the excellent news that he will be going to Tokyo. In an attempt to get as much badminton in before then, the singles player partners the Finn, Hanna Karkaus.

Watch the matches live on www.badmintoneurope.tv