Cathrine Rosengren prepares for her Paralympic dream at the Denmark Masters 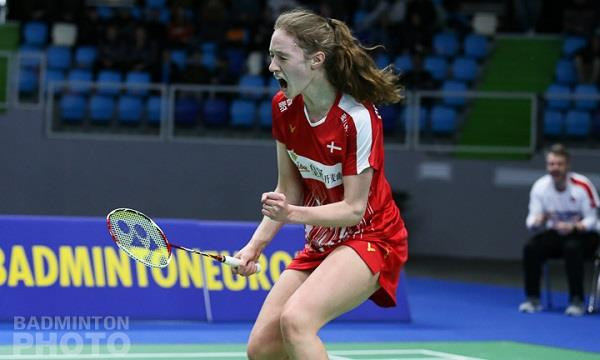 Just a few days after the festival of badminton that was the Tokyo 2020 Olympic Games, we are going straight back in with more badminton at the Denmark Masters 2021.

On the west coast of Denmark in the seaport town of Esbjerg, several players are coming from Tokyo and going straight back into the mixer. Here are the ones to watch.

Men’s singles
It’s a draw dominated by Indian and French players, with Lakshya Sen as number one seed and on the opposite side as number two seed, the experienced Thomas Rouxel.

The Centre of Excellence and Sweden’s Felix Burestedt, Azerbaijani Ade Resky Dwicahyo, Canada’s Brian Yang and Sri Lanka’s Niluka Karunaratne will have the warm glow of having just competed at Tokyo 2020.

The eighth-seeded Mads Christophersen, perhaps inspired by his fellow countryman Viktor Axelsen winning Olympic gold on Monday, will look to build on his 2021 form.

However, the Orleans Masters runner-up may have a tricky second round in the form of Christo Popov, the 2020 European Junior Champion. Although, Popov will have to be ready against his first-round opponent, Siril Verma, who in 2019 pushed Korea’s Heo Kwang Hee close, the man who broke Japanese hearts by knocking out Kento Momota in Tokyo 2020 last week.

Women’s singles
We get another glimpse of the rising European star of women’s singles, Line Christophersen. After winning silver at the 2021 European Championships, the 21-year-old reached another final at the Spain Masters. She will be looking to do the same this time and seeking her first title win of the year.

If results follow the pattern of the seedings, then Christophersen would meet her more-experienced compatriot, Line Kjærsfeldt in the final. The two met at the Denmark Open last year and it was youth that prevailed that time.

Fifth seed Jordan Hart is getting used to competing under her new flag of Poland after two tournaments in Spain, perhaps it will be third time lucky for a deep run in Denmark.

Men’s doubles
Scotland tops the seedings with Alexander Dunn/ Adam Hall who are hoping to pick up where they left off after Dunn being side-lined with an injury, leaving Hall to play with other partners.

Major dangers for them come in the form of two Danish pairs of Joel Eipe/ Rasmus Kjær and Daniel Lundgaard/ Mathias Thyrri who in the past two years have shown they can play at a high level.

Another notable mention is the new Indian pair of Krishna Prasad Garaga/ Vishnu Vardhan Goud Panjala. They reached the final of the Orleans Masters and all pairs will have one eye on how this pair progresses.

Women’s doubles
It is almost a full house of Danish pairs in the top four seeds. Amalie Magelund/ Freja Ravn lead the way after reaching the Spain Masters final in May.

In at number two seeds, India’s Ashwini Ponnappa/ Reddy N. Sikki are a surprise entry. Ordinarily playing on the World Tour, their results of late have not been up to their standard and perhaps are looking for a confidence boost. However, many talented pairs are ready to cause them problems.

Mixed doubles
Amalie Magelund, as mentioned above, reached the final of the Spain Masters in women’s doubles. The energetic 21-year-old also recorded a finals finish in the mixed doubles with Niclas Nohr. As number one seeds here, they are the ones in form and the ones to beat.

Scotland’s Adam Hall/ Julie Macpherson have had some strong results of late, especially when representing Scotland in team events. As number two seeds, a finals day meeting with Nohr/ Magelund would be ideal. The two faced off at the European Championships in Kyiv this year and the Danes narrowly took it. They will take it match by match, but revenge could be on the menu for the Scots.