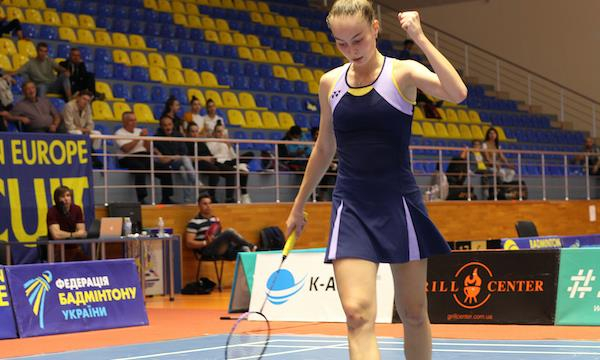 Teenage sensation Buhrova grabs the headlines at home with a stunning senior title. The players competing on home soil and Germany remained successful in a tournament in which they had to face many talented Asian players that took part in the event, and a young home player stood out among the rest.

With no presence in the men’s singles and men’s doubles podiums, European players still got to stay on top in the other categories which saw Ukraine and Germany winning four and three medals respectively, while Estonia and Switzerland got a medal each.

Huge win for Buhrova
While there was no European player to reach the podium in men’s singles, with Ukraine’s Kyrylo Leonov losing to Ong Ken Yon in the quarterfinals and many other Europeans stood up to Asian talents, it was a happier story for the hosting country in the women’s singles.

At only 17 years old, Polina Buhrova had just a few weeks ago become the 2021 Latvia International Champion and she repeated the achievement on home soil and also playing against not only European but also Asian opponents.

Natalya Voytsekh was the last Ukrainian champion in the women’s singles category, back in 2017, and Buhrova fought to keep the title at home this year. Buhrova’s journey to gold was not an easy one, with all her clashes being against Indian players, except for the final.

The 2020 European Junior Badminton Championships women’s doubles medallist had a clash against Swiss player Dounia Pelupessy in the fight for gold, and after a win in straight games for the Ukrainian player, Pelupessy had to settle for silver. Ukraine earned yet another medal in women’s singles thanks to Mariia Stoliarenko, who won one of the two bronzes.

Two medals for Moszczynski
If there was a name that stood out among the rest, it was Emma Moszczynski. The 20-year-old German player fought her way to the podium in women’s doubles and mixed doubles and succeeded in both, becoming the women’s doubles champion with Stine Küpert and earning silver with Johannes Pistorious.

These were not the only German duos winning medals. Malik Bourakkadi/ Annabella Jaeger won bronze in mixed doubles after a victory against sixth seeds and fellow German pair Jan Colin Völker/ Stine Küspert.

Strong European pairs
Estonia also had a pair showing their strength, but the top seeds Kati-Kreet Marran/ Helina Rüütel were stopped on their way to the final by Ukraine’s Mariia Stoliarenko/ Yelyzaveta Zharka, who went on to win silver, while the Estonian duo settled for bronze.