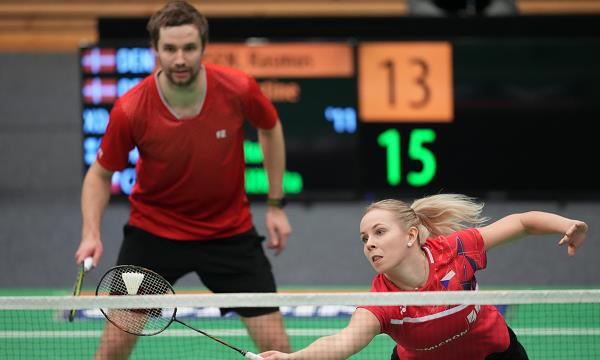 From heroics for Finland at the Sudirman Cup, Anton Kaisti partners Alžběta Bášová to lift the mixed doubles title at the Swedish Open.

The Finnish-Czech combination emerged during the pandemic-disturbed 2020 season. Runners up in the Austrian Open 2020, the pair showed promise again at the 2021 European Championships, pushing the eventual silver medallists Marcus Ellis/ Lauren Smith to a close match.

Anton Kaisti is known for arranging dual nationality partnerships having previously played with Cheryl Seinen of the Netherlands and even Gabriela Stoeva back in 2013, amounting to two titles with each.

Uppsala, Sweden was the location where this newest partnership got underway with a big win.

— Back on top after a few years since the last victory. Title number 13, I think. Kaisti hesitated.

It is indeed. 11 mixed doubles, one men’s doubles and one men’s singles. Although not a title, noteworthy is the first Finnish match win at the Sudirman Cup which was secured by Anton Kaisti/ Jesper Paul against M. R. Arjun/ Dhruv Kapila, 22-20, 21-19.

The route to victory
Following a bye in the opening round, Kaisti/ Bášová dispatched the USA pair of Vinson Chiu/ Jennie Gai, 21-15, 21-17, entering the quarterfinals.

Singapore’s Jun Liang Andy Kwek/ Yujia Jin proved to be relentless opponents. Despite an 11-5 lead at the change of ends in the third, they found themselves locked in battle at 13-13. They refused to let their opponents take the lead and held on to win, 17-21, 21-17, 21-19.

The top-seeded Danes, Rasmus Espersen/ Christine Busch also gave it a good go in the semifinal. Missing two golden opportunities to take the opening game, Kaisti/ Bášová allowed the Danes to steal it. In the second game, 10 consecutive points gave them a 13-4 lead that they did not squander.

There was a similar feeling in the third game when scoring six in a row, however, the Danes bounced straight back this time to 14-14. The effort seemed to take its toll, and the more experienced duo secured the win and a spot in the final.

The final
Danes Kristian Kræmer/ Amalie Cecilie Kudsk were awaiting in the final. There was not much between them in the initial exchanges, at 17-17 it was anyone’s to take. Kaisti/ Bášová may have taken a lot from their previous two battles and were able to believe that they can do it.

Taking the first game, they continued their fight into the second, but the Danes were on top at the break, 11-9. With the title just 11 points away, Kaisti/ Bášová stepped it up one last time and were able to win the final 21-19 21-16 and lay hands on their first title together.

-Good tournament for us, we played some good matches and managed to keep the focus until the end. Thank you, Sweden for hosting the tournament in these covid ridden times, Kaisti said.

Watch the matches
To watch all matches from the Swedish Open, go to www.badmintoneurope.tv