Action is about to start at the Austrian Open 2022

Get ready for the Austrian U17 Open

Action is about to start at the Austrian Open 2022 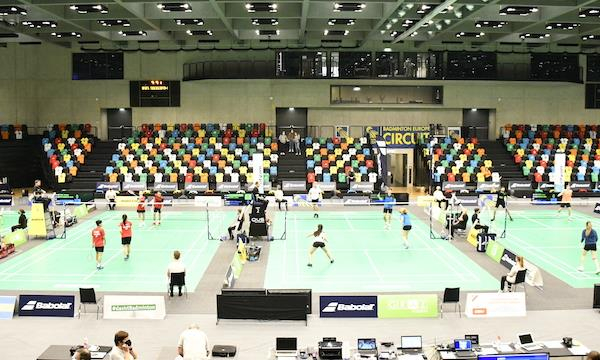 Everything is ready in Graz, Austria, for matches to start for the Austrian Open 2022. You can follow all the action on www.badmintoneurope.tv.

There’s no long to go until players step on court to play the first matches of the Austrian Open 2022. Today fans will get to see who makes it out of the qualification round. Here is who you can expect to see at the tournament.

Experienced players and a strong Chinese Taipei team
The only singles Austrian seeded player in the tournament is perhaps one of the most experienced too. This year so far, his best result has been at the Ukraine Open, where he won the bronze. Wraber will be facing young talent Magnus Johannesen, who in 2022 has already stood on the podium in three European Circuit tournaments.

Daniel Nikolov is the only other European seeded player besides Wraber in the men’s singles category. The Hungarian will play his first match against Hong Kong’s Chan Yin Chak, who has reached four European Circuit quarterfinals this 2022. Nikolov will also be competing in the men’s doubles. Unseeded Collins Valentine Filimon will have to play the qualification round first, but after becoming the Slovenia International champion last week, we will have to see if he gets to earn a good result on home soil too.

Chia Hao Lee, number three seed, will be competing along with fellow Chinese Taipei players, some of whom have earned great results at the Slovenia International last week. Wei Chun Wei/ Wu Guan Xun, last week’s champions, will get started in Austria with a clash against Malaysia’s Muhammad Nurfirdaus Azman/ Jimmy Wong, a pair that they recently faced at the quarterfinals in Slovenia.

Chances in doubles for the host country
Germany has plenty of representation in the doubles with some talented pairs who have already earned some great results in the last year — Marvin Datko/ Patrick Scheiel in men’s doubles, Annabella Jaeger/ Leona Michalski in women’s doubles, and Patrick Scheiel/ Franziska Volkmann in mixed doubles.

Women’s singles will not have any of last year’s winners competing. Fighting for the title will be Vivien Sandorhazi, eight seeded, Portugal International champion Wen Chi Hsu, and 2022 Slovenia International champion Lin Hsiang Ti, among others. Katrin Neudolt, the first deaf athlete to have competed at the European Championships, will be representing Austria in the category.