Everything’s ready for the show to begin at what will be the first edition of the Nantes International Challenge.

Tomorrow morning, the first-ever edition of the Nantes International Challenge will be hosted at the Metropolitan Sports Hall of Trocardière. With the first champions waiting to be crowned, there draws of the five categories have some prominent names to offer, as well as some familiar names of Asian players who have been taking over some of the podiums in the European Circuit.

Men’s singles
The host country looks to start out strong in the first edition of the event. Arnaud Merkle, Christo Popov, and Lucas Claerbout will be France’s strongest chance at holding the men’s singles champions title. However, they will have tough competition. Big names such as Misha Zilberman and Toby Penty announce some good clashes in the deciding stages.

Denmark will get started in the main draw with seeded Victor Svendsen, Mads Christophersen, and Ditlev Jaeger Holm, while young Danish sensation Magnus Johannesen will already be competing tomorrow. The recently-crowned Denmark Masters champion Lu Chia Hung will also be trying for another title, this time on French soil.

Women’s singles
Having won the titles in Portugal, Austrian, and Italy this year but retiring just last week in Bonn, Wen Chi Hsu is part of the Chinese Taipei team that has taken the European Circuit by storm. Hsu tops a varied seeded list.

France’s strongest contender, Yaelle Hoyaux, will first be facing Jennie Gai, USA. Jordan Hart, seventh seeded, will be facing India’s Rituparna Das on her first match. BEC Centre of Excellence’s Martina Repiska and Gayle Mahulette will both be competing at the event.

Men’s doubles
There are many pairs to watch out for in the men’s doubles category. Lucas Corvee/ Ronan Labar could give the crowd more reasons to cheer by earning a great result on home soil. Eloi Adam/ Julien Maio are another French pair who have good chances of getting important wins.

Fourth seeded Ondřej Král/ Adam Mendrek, Czech Republic, will not have it easy on their first match on Friday as they will be facing another strong duo, Danes Rasmus Kjær/Frederik Søgaard. The German duo of Bjarne Geiss/ Daniel Heiss could be looking to repeat the good results they earned also in France some months ago, at the Orleans Masters.

Women’s doubles
Denmark’s Christine Busch/ Amalie Schulz are the top seeds in women’s doubles. They could potentially be facing Chloe Birch/ Jessica Pugh, a new pair who has already shown some strong performances. Julie Finne-Ipsen/ Mai Surrow are another Danish pair that could reach the podium.

Fourth seeded Flavie Vallet/ Emilie Vercelot could earn France a medal, but they could be facing Hsu Ya Ching/ Lin Wan Ching in quarterfinals. The pair from Chinese Taipei got the title in Bonn International last weekend. It remains to be seen who Annabella Jaeger/ Leona Michalski will be facing first, but the German pair can be a force to be reckoned.

Mixed doubles
The host’s only representatives in the main draw, Lucas Corvee/ Sharone Bauer have got two medals in the European Circuit so far this year, and playing at home could be extra motivation to get far. Rasmus Espersen/ Christine Busch, Denmark, haven’t earned a medal since January this year at the Swedish Open, but the pair have chances of earning a good result in the event.

Ethan Van Leeuwen/ Chloe Birch had a good run in the Italian International and Austrian Open, and together with top seeds Callum Hemming/ Jessica Pugh, it could book England a spot on the deciding stages. 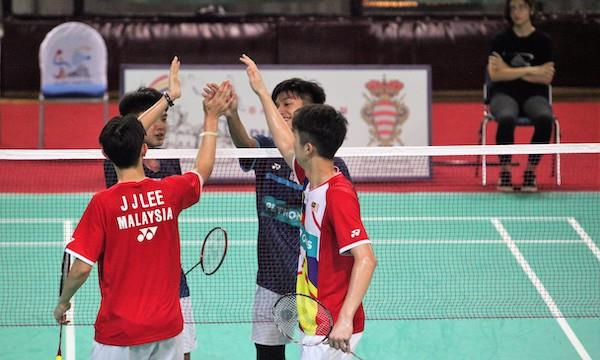