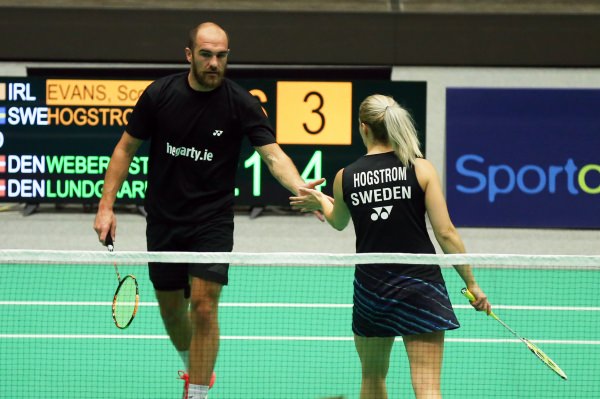 The Belgian International kicked off today in Leuven and while Japan’s Kento Momota was the big draw Ireland’s Scott Evans and Amanda Hogstrom from Sweden took to the courts in their very first outing as a mixed doubles pair. Evans has had a quiet tournament schedule since the Rio Olympics while Hogstrom recently parted company with long time partner after Nico Ruponen announced his retirement after the world championships in Glasgow.

“Scott is getting older now so maybe a switch to mixed doubles suited him at this time where he could just run around me all day” said a light-hearted Hogstrom when commenting about the idea behind the new partnership.

In today’s first round the Irish/Swedish combo looked a world away from the main draw after losing the opening game to Danes Estrup and Lundgaard. Their combined experience pulled them through in the end and Evans was brutally honest in his appraisal of the match.

“This is our first match and tournament together so there is always going to be some errors. Its new for us both so to come through that match was a bonus in itself.”

“This is a good start to our time together” said Hogstrom after the win. “We have a pretty ok draw now also tomorrow and the matches today will help us as every matching is a learning experience.”

Speaking about their plan Evans outlined the future for the pair. “We have a plan up to Christmas. That is it essentially. We will play many tournaments and see how it goes. If it does not work by then well there is not much point continuing after that but if it clicks we will see where it goes after that.”

It proved to be a good day for Sweden and Ireland all round as Eidestedt and Nistad joined Evans & Hogstrom in the mixed doubles main draw and European U17 champion Nhat Nguyen blasted his way through the men’s singles qualification joining compatriot Evans in the men’s singles main draw. 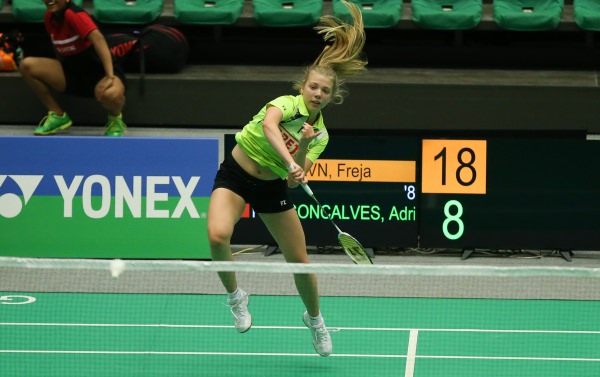 Danish youngster Freja Ravn (pictured above) doubled up her qualification efforts to make it through both the women’s singles and doubles qualification lottery. The 17-year-old played a total of 4 matches across both disciplines to book her main draw spots.

“It has been a good day with some good matches and it’s great to win singles and doubles with Amalie (Magelund). The speed is different of course coming from junior into senior but I am learning to cope with that and I really look forward to tomorrow where I will enjoy my time on court for sure” said Ravn after her singles qualification success.

It was a decent day’s work for the host of European youngsters in Leuven with emerging stars such as Marina Ilyinskaya, Line Christophersen and Toma Junior Popov also making it through as they settle into senior life on the circuit.

Soraya De Visch Eijbergen also came through her qualification draw as the Dutch women battles back from a year out through injury. Two easy wins in under half hour each will mean DeVisch Eijbergen should be fresh for her first round match against Natalia Perminova tomorrow.

Article an Images by Mark Phelan (Live in Leuven)