After four consecutive weeks at future series level the circuit kicks up a notch this week with the International challenge rated Spanish Open. With a large travelling contingent from Japan and Taipei the tournament represents a Europe V Asia battle with the home Spanish players hunting success in both singles events.

Pablo Abian enters his home tournament as top seed and world number 34. The 32 year old is without a win in 2017 with his last success coming in Cardiff in November where he won the Welsh International. The Spanish number 1 will get an early indication of his form as he takes on Japanese youngster Koki Watanabe in the opening round. The Japanese player is just 18 years old but has European experience after playing in the circuit this season in Italy, Austria and Finland.

Mark Caljouw has been one of the form players this season and he maybe one to watch in the top have of the draw. Denmark’s Rasmus Gemke comes into the tournament unseeded but carries a new found confidence and maturity with him to Spain after his victory in Finland in April. The Danes qualities have bubbled to a new level this season and he will certainly be pushing on to greater things in the years to come.

Beatriz Corrales comes into the tournament as world number 21 but like compatriot Abian has had a quiet 2017. Also like Abian the Madrid based Spaniard last tasted success in Wales at the tail end of 2016 and will also like to go one better than her runners up spot on home soil last year.

Mette Poulsen is seeded two and starts life outside of the Danish national team with this trip to Madrid. With Dahl, Jakobsen, Andersen and Blichfeldt all in tow it’s clear that Denmark will have a bearing on the destination of the women’s singles title this week.

The whole European cast will need to keep an eye on Shiori Saito. The tall and powerful Japanese is used to winning in Europe after her success in Finland a few short months ago. She is the major unseeded threat for this women’s singles competition. 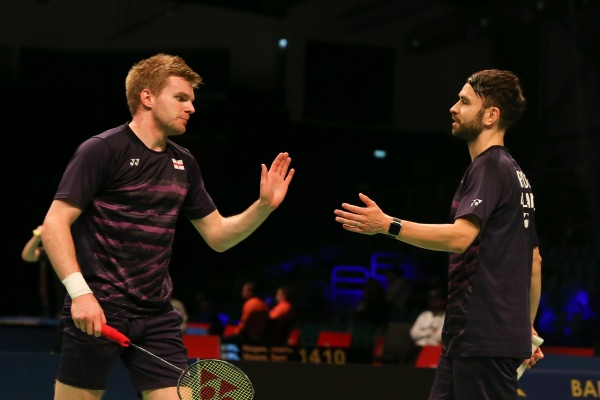 England’s Marcus Ellis & Chris Langridge (pictured above) would have been expected to be in Indonesia this week mixing it with the big boys, of which they are justified members after their Olympic exploits. Instead the English and world number 16 pair will make a step back to International Challenge level as part of their preparation for the world championships in August.

The English will be odds on for the title however with 4 Japanese pairs as well as some top Euro talent on show the English will have to work for the win. Germans Zurwonne & Jansens have had an excellent 12 months with three circuit wins which has propelled them to 25 in the world while Dutch pair Jille & Arends have proved a handful this past year on the circuit.

In the women’s doubles Julie Finne-Ipsen and Rikke Soby will look to celebrate their worlds qualification with a circuit win. The Danes have been ultra consistent this past year with a bag full of semi final and final appearances. A challenge win has eluded them after coming close in Belgium and Ireland and this may be their week.

Lauren Smith and Sarah Walker will be in confident mood after their European bronze medal but it’s the unseeded Dutch pair Muskens and Piek who catch the eye as they return from an extended period out of the game due to injury. The Dutch were as high as 7 in the world just over a year ago and that pedigree will be sure to shine through this week.

Finally, the mixed doubles represents a decent opportunity for a pair to come from the pack. Mikkelsen and Surrow have been the outstanding circuit pair this season and they come into this tournament unseeded. Sam and Chloe Magee return to the circuit after their run to the bronze medal at the Europeans in April while other unseeded pairs like Piek & Arends (NED) and Ellis & Smith (ENG) just jump off the page as potential winners.

For all previous winners of the Spanish International click HERE