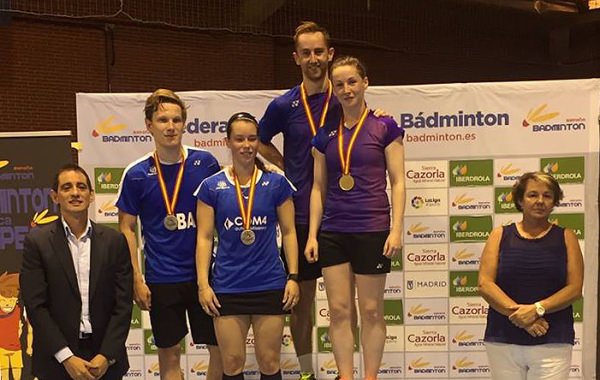 It has been a bumper few months for Ireland’s Sam and Chloe Magee. It was not so long ago the Irish siblings were creating their own piece of Irish badminton history by winning bronze at the European Championships in Denmark. Today the Irish won the Spanish International title seven years after their previous Spanish success which was their first title as a pair.

The mixed doubles draw had quality throughout this week in Madrid. Not only were most of Europe’s top circuit pairings in attendance but also a host of Japanese and Taipei pairs which served to elevate the draw to a new level this week.

The Irish came into the event as second seeds and were certainly one of the marked pairs after the Euro bronze success in April. The Irish beat European junior champions Davletova and Alimov in two games as early as round two but it was their win over third seeds Labar and Fontaine, fellow European medal winners, that hinted the Irish were on top of their game this week.

In today’s final the Irish were up against emerging Dutch pair Robin Tabeling and Cheryl Seinen. The Irish got off to the best start taking the opening game 21-11. Even though the Dutch fought back in the second game the experienced Magee’s held their nerve to win the title with a 21-18 second set victory.

The Irish came through the entire tournament without dropping a set which is a testament to the level they are currently playing at. The Magee’s were obviously delighted with their success as they took to their social media pages after their victory.

“Delighted to be Spanish Open Winners in mixed with Chloe. Seven years ago we won our first ever international title here, so it always bring great memories playing in Madrid.”

“Spanish international CHAMPIONS and its Father’s Day, so this one can only be for my Dad! Our biggest fan since day one.  Thanks to everyone for your well wishes, it really means a lot. Sunny Spain you were amazing, I’ll be back.”

In the men’s doubles there was some success for the Dutch when Jacco Arends and Ruben Jille came through the pack unseeded to lift the title. Like the Magee’s in the mixed doubles the Dutch claimed the title without dropping a single set defeating Matsui and Takeucki of Japan in today’s final. The Dutch are on the up in men’s doubles and this relatively new pairing certainly have a lot more wins in their locker. 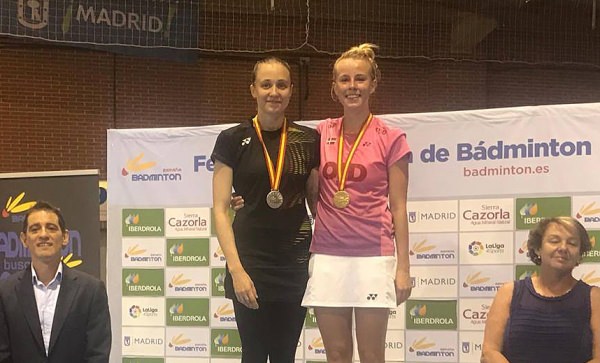 Ever since Mia Blichfeldt first appeared on the senior badminton scene as far back as 2013 the 2015 European junior champion has had a major circuit written as part of her destiny. The Dane has won several times on the circuit with victories in Norway, Slovenia, Portugal and as recently as January when she won the Swedish International but all these victories were at International Series level.

Today the biggest smile in Danish badminton got to shine once again as Blichfeldt (pictured above on podium) took the Spanish International singles title her first international challenge win. The Dane, who does not turn 20 until August, had to do it the hard way this week in Madrid where she had to twice fend off Asian opposition in a pair of tough three set matches.

In today’s final Blichfeldt was a hugely convincing winner 21-12 21-12 over Russia’s Evgeniya Kosetskaya. The Russian had nothing left in the tank for today’s final after a series of tough three set matches throughout the tournament.

The home nation has now gone three consecutive Spanish Internationals without a single success. Abian, Corrales and Marin have all won over the past decade on multiple occasions and things looked bleak this year as both Abian and Corrales suffered early defeats.

However, Luis Enrique Penalver benefited from a lucky promotion to the main draw from qualification and spurred on by that stroke of luck ran all the way to the final where he faced off against Yu Igarashi. The Japanese was a runner up in Finland just a few short months ago and today made sure if his success on his return to European soil.

After a good week’s work Penalver was unable to match the Japanese player in today’s final with Igarashi winning 21-13 21-14.