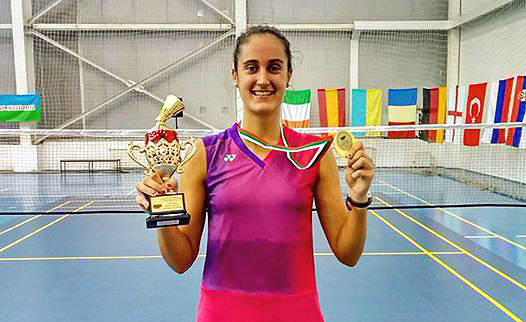 Last Sunday 14th August Danish rising star Julie Dawall Jakobsen came out on top in the women’s singles final of the Bulgarian Junior beating Spain’s Clara Azurmendi in a tight three set match. Just four days later the Spaniard executed her revenge on the Dane lifting the Eurasia Bulgaria International, the now traditional first senior tournament of the new season on the Badminton Europe circuit, on a day that saw five different nationalities climb the top step of the podium.

While the pair were hot favourites in the junior event last week their seeding of 7 (Azurmendi) and 5 (Jakobsen) indicated the size of the task ahead of the pair in the senior event and all after the huge physical demands of playing a full junior tournament without a break in between.

Azurmendi (pictured above) took down the fancied Sofie Holmboe Dahl in the semi-final while Jakobsen was equally impressive beating third seed Fontaine Chapman of England in two games.

In today’s final the first set proved to be key for Azurmendi with the Spaniard coming through 26-24. The tall Spanish number three then powered home to the title taking the second set 21-11 to get her new season off to the perfect start.

Bulgaria had two pairs in action on finals day with the majority of the home hopes resting on the shoulders of the women’s doubles pairing of Mariya Mitsova and Petya Nedelcheva. Just as the home nation lost the opening match of finals days, Philip Shishov and Alex Vlaar going down in two tight games to Thai pair Pakin Kuna-Anuvit and Natthapat Trinkajee in the men’s doubles final, it was not to be for the ladies’ doubles either losing out, some would say, unexpectedly to Turkish pair Neshlihan Kilic and Cemre Fere again in two games.

In the men’s singles final Finland’s Kalle Koljonen was looking to recapture the form that took him to his maiden circuit title last season but the Finn came unstuck today against Patrick Bjerregaard. The Dane took the opening game 21-14, and even with a spirited fight back from Koljonen, Bjerregard took the match with a 21-19 win in the second set.

For all results from Eurasia Bulgarian International click HERE