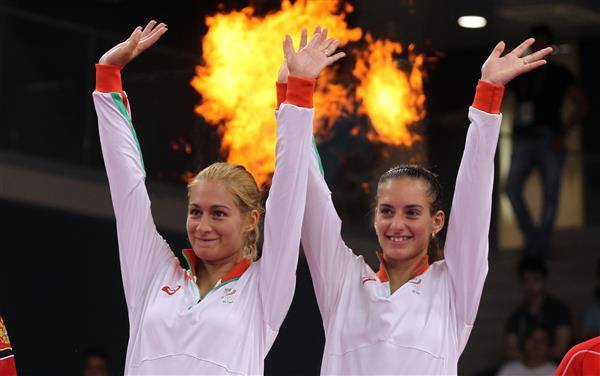 With 2015 rapidly drawing to a close the final shuttles of the Badminton Europe year were hit today in Mersin, Turkey. Germany walked away with a pair of victories in singles while the Stoeva sisters from Bulgaria claimed their fourth title in a row rounding off a golden circuit year with their 10th win, two Grand Prix titles in Russia and The Netherlands, seven European circuit titles as well as the coveted European Games women’s doubles title.

The Stoeva’s (pictured) have been a main stay of the circuit over the past few years since winning the European Junior title in 2013, which coincidentally was also in Turkey. In Mersin this week, the sisters did what they have done on so many occasions during 2015, cruised to the title without dropping a single game.

In today’s final the Stoeva sisters faced formidable opponents in the form of local favourites and twice winners this past year, Neslihan Yigit and Ozge Bayrak. The Turkish pair had past the opportunity to play singles on home soil this week to concentrate on doubles but their challenge was to fall short on finals day.

In essence the manner of the 21-19 21-12 win for the Bulgarians summed up their circuit dominance this year in what will probably be the circuits last sight of the European Games winners before the Rio Olympics. At number 17 in the world circuit wins are now not enough to improve that ranking and Super Series beckons.

Coming into this week top German’s Marc Zwiebler and Karin Schnaase were red hot favourites to lift both the men’s and women’s singles titles. Schnaase in particular rounded off a turbulent year with a welcomed win. A runners up spot in Wales a few weeks ago sent the signal out that the German was getting back to her best after sustaining a frustrating injury at the Dutch Open and today’s two game win over Kati Tolmoff will set Schnaase up nicely for 2016 and the final push towards Rio.

Zwiebler has made a handful appearances on the circuit since September and today’s win in Turkey was not only predicted but also pretty much routine for the Germany world number 19. Blighted by a recurring foot injury Zwiebler has had to be most inventive in his tournament schedule and the 4000 points secured this week in Turkey was a well thought out and executed win.

Not to be outdone Robert Mateusiak and Nadia Zieba (pictured below) continued their remarkable 2015 comeback as they cruise towards Olympic qualification. The Poles started the beginning of the summer without a ranking and as outsiders to go to Rio. Seven months later they are 6 time winners including the Bitburger Open Grand Prix Gold and well on their way to Olympic qualification, the fourth games in succession for the 39-year-old (40 in January) Mateusiak. 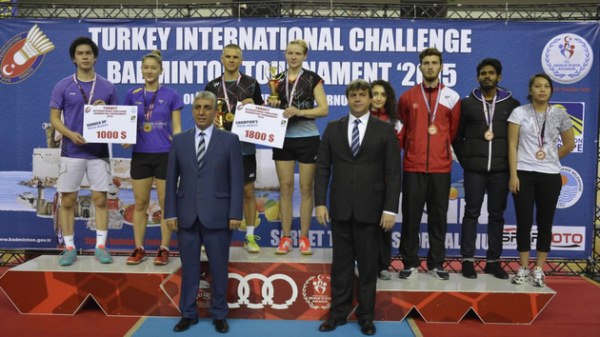 This week in Mersin Mateusiak and Zieba collected a virtually unchallenged 4000 points. Not a set dropped and a dominant 21-12 21-13 final win over Somerville and Chau of Australia summed up their weeks work to perfection.

While things are heading in the right direction for the Polish mixed doubles the opposite can be said for probably the most travelled European men’s doubles pair this last 2015 circuit year. For the second week in succession Adam Cwalina and Przemyslaw Wacha lost out to Kasper Antonsen and Niclas Nøhr of Denmark, this week the loss even harder to take as it was in the final. Three wins in any year would represent success but the Poles will rue 9 additional final losses as they lurk on the fringes of Olympic qualification. The Danish pair continue to go from strength to strength as the Polish take a well-earned Christmas break to recharge and come back fighting on 2016.