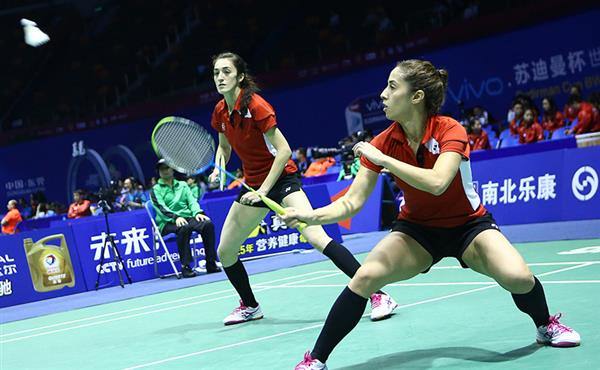 As 2015 draws to a close so too does the Badminton Europe circuit with a final trip to Mersin in Turkey on the cards for all of Europe’s elite circuit players. With both Neslihan Yigit & Ozge Bayrak (pictured) passing on the tempting opportunity to play both singles and doubles on home soil the top Turks will focus solely on the women’s doubles as they try to land their third international challenge title of the year.

Yigit & Bayrak are among the seeded pairs for this week’s women’s doubles but standing in their way with be Europe’s number one circuit pair this season, the Bulgarian Stoeva sisters, in what will most likely be their last appearance on the circuit before the Rio Olympics as the lure of Grand Prix Gold and Super Series points proves not only tempting but necessary.

Bayrak and Yigit are in the bottom half of the draw and before they get a shot at the Bulgarians they face a potential tough second round match against Sweden’s Nistad and Wengberg, twice winners themselves this past year. Waiting for the Turks in the semi-finals will be Germany’s Nelte & Goliszewski who will be keen to round of 2015 in style to keep their noses in front of Michels and Herttrich as the battle intensifies for number 1 in Germany.

The Stoeva’s should breeze through the early rounds and with the possibility of a fourth consecutive win on the cards for the Bulgarians they are the overwhelming hot favourites to win in Mersin and depart the circuit in style.

Team Germany will send a strong singles representation to Turkey this coming week and while Nelte & Goliszewski will be one of the favourites for the women’s doubles both Marc Zwiebler, if fit and travelling, alongside Karin Schnasse will top hotly tipped to lift the singles titles.

Zwiebler has walked the boards of a few circuit tournaments this season but continued foot issues have limited his international appearances. The German will not have it all his own way should he make the trip to Mersin with Rasmus Fladberg and Joachim Persson both nestled in the German’s half of the draw.

Schnasse continues her quest for the Rio Olympics and while her form has been up and down no one can question her commitment and dedication to qualify for Rio. With Zetchiri, Blichfeldt and Lansac all in the Germans side of the draw the German number 1 will need to find the form that took her to both the finals of the Welsh and Dutch Open’s to make the podium.

Poles Mateusiak a& Zieba have moved back onto the first page of the world ranking list in mixed doubles and they will look to put their final defeat in Dublin to rest with a win in Turkey. On paper there is no one to touch them but the same was said about the Irish Open so the Poles will need to be prepared to really push this title over the line and move into 2016 with renewed enthusiasm.

Poland will also have red hot favourites in the men’s doubles as Cwalina and Wacha hunt down that illusive win. The Poles victory in Prague back in September has been their most recent success but a pair of finals in recent weeks has got them back on track. Only International Challenge wins will help the Poles in their quest for world ranking points and ultimately Olympic qualification and this week might just be their week to get their campaign back on track.

All the action kicks off in Mersin on Thursday with qualification rounds with live score available HERE.

For all draws for the 2015 Mersin Turkey International click HERE.