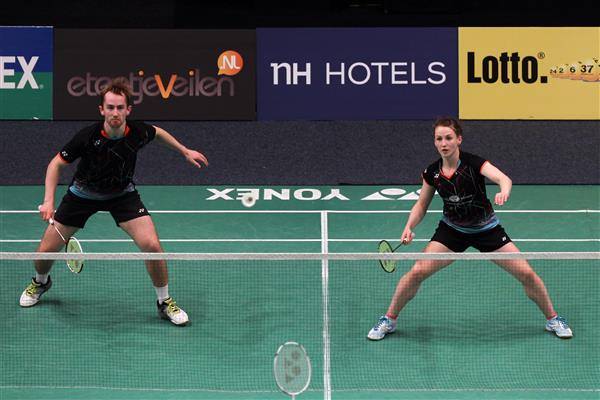 Each year the Irish Open signals the final dash for circuit honours with Christmas looming just around the corner and the end of another calendar year. 2015 will be the last year the Irish Open will be held in the Baldoyle Badminton Centre as the event plans to move to the new National Arena in 2016.

After an up and down few months for Ireland’s elite the Irish Open, an international challenge event on the Badminton Europe circuit, represents a real opportunity for players such as Scott Evans, Sam & Chloe Magee to end the year on a high and go into 2016 with renewed optimism.

Tough Task for Magee’s in Mixed.

Sam & Chloe Magee (pictured) come into the Irish Open as top seeds in the mixed doubles event. It has been a difficult few months for the Irish number 1 pair since their victory at the White Nights in Russia at the beginning of the summer.

There were glimpses of brilliance in their run to the quarter final at the Scottish Open GP two weeks ago but on the flip side the Irish would have been disappointed going out at the quarter final stage of the Welsh International last week in Cardiff.

Drop in the mix the fact that the Irish pairs likely opponents in their opening match this coming week in Dublin will be against Welsh winners Nottingham and Westwood and Polish second seeds Mateusiak & Zieba, who have raced up the world rankings this year with 5 wins to their names, will be waiting to add another title to their impressive list no matter who come through the top half of the draw to be their likely final opponents.

“It’s a tough challenge this week in the mixed doubles but hopefully we get our best badminton out for the home crowd. We have fallen behind in the Olympic race, the pair around us are playing well and we will have to try and get some big wins from now until May to turn that around.” Said Sam Magee ahead of his home international this week.

A good result for Evans should set him on road to Rio.

Scott Evans had a bumper 2014 which set him up for Super Series main draw and ultimately the points that go along with those guaranteed first round spots.

While the results this year may have gone against him the goal was to be qualified for Rio by the end of 2015 which looks to be on the cards, once a decent result is achieved in Dublin this week. A decent run will put Evans in the hot seat for Rio and 2016 can be a concerted training block on the lead up to the Olympics something that the Irish number 1 was never in a position to do in the past.

Brice Leverdez is the tournament top seed and things being correct and all the stars aligned a final between Leverdez and Evans is a possible outcome. Russia’s Vladimir Malkov travels to Dublin with confidence after his Welsh win but of all the top seeds it is the Russian who has the most tricky opening match against European Junior champions Anders Antonsen.

Karin Schnasse goes to Dublin with some renewed form after a trip to the final in Wales last week. We can now expect the German number 1 to power through the top half of the draw even with Rhode, Magee, Jakobsen and Lianne Tan, who may be the freshest player in Dublin, there looking to exploit any weakness from the German.

The bottom half of the women’s singles has last week’s winner Anna Thea Madsen on the hunt for back to back titles. Linda Zetchiri is seeded two and at four is Olga Konon who for the last two weeks has been beaten by eventually winners of both Scottish Open and Welsh International after taking sets of both winners Kjaersfeldt and Madsen.

Gabriela & Stefani Stoeva are the by now customary top seeds in the women’s doubles. At number 14 in the world International challenge wins are the only thing on their mind in terms of circuit participation. Indeed, IC wins at circuit level are the only thing that will serve to improve their world ranking points haul.

After the forced withdrawal of Scottish Open runners up Barning and Tabeling the Irish Open title should really be nothing more than a formality for the Bulgarians. England will apply some heat on the Stoeva’s and playing Birch and Wallwork in their opening round will force the top seeds to be on their toes from the start.

Add into the mix Wengberg and Nistad, twice winners from just two starts as a pair, and it becomes apparent that the European Games Champions will still have to stay focused in Dublin this week.

Defending men’s doubles champions Cwalina & Wacha return knowing nothing less than a win and a staunch defence of their points will be acceptable this week. We have to look back to September to find the Poles last win as they travel week on week in a bid to qualify for Rio.

For all draws for the Irish Open click HERE

Article and top Image by Mark Phelan for Badminton Europe.