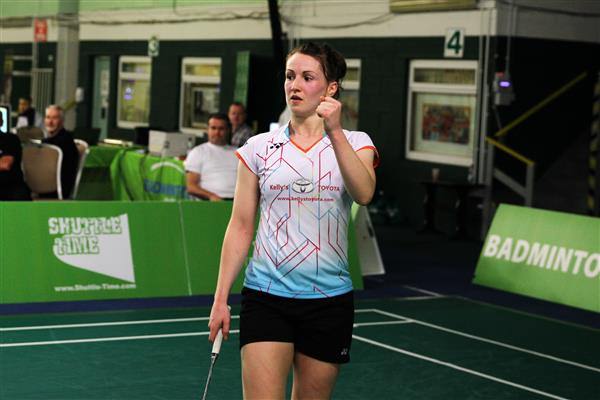 Both Anna Thea Madsen (DEN) and Vladimir Malkov (RUS) have experienced all the highs and lows of tournament life in the past 5 days. From the euphoria of winning in Cardiff just 5 days ago to the despair of losing the opening round in the tournament immediately after. In this case that tournament proved to be the Irish Open in Dublin.

Anna Thea Madsen looked to be good form on the Badminton Ireland streaming court in her opening match against Delphine Lansac. The French woman took the opening game 21-18 but when Madsen bounced back to take the second it would have been fair to assume, given her current form, that the Dane would seize the opportunity and cruise home.

However, Lansac is a fighter and the French player and upset the odds to send Madsen packing in the third game to completely open up the bottom half of the draw.

The was better luck for Denmark in the top half of the women’s singles draw as Julie Finne-Ipsen caused the biggest upset of the day beating Karin Schnasse in three games. The German went over heavily on her ankle in third game which unsettled Finne-Ipsen for a handful of points but the Dane maintained her composure to come through in three games to send the top seed packing.

Malkov came unstuck against European Junior Champion and Belgian International winner Anders Antonsen. The Dane looks to be the one to beat this week in Dublin and followed up his first round win over Malkov with an easy win over Kieran Merrilees of Scotland in the second round.

The home favourites Sam & Chloe Magee stumbled on some well overdue form as top seeds in the mixed doubles. The Irish have seen Olympic qualification starting to slip away over the past few weeks but a victory over Welsh winners Nottingham & Westwood did a lot to fill up the Irish confidence tank as they try to put a series of tournament match wins together.

The Irish came back from a set down to beat the English and now play Barning & Tabeling (NED) in tomorrow’s quarter final. Chloe Magee (pictured) also made it through to the women’s singles quarter final as she bids to get her singles qualification campaign back on track.

While the Magee’s were doing the business there was disappointment for Ireland’s other hero Scott Evans who looked out of sorts in his men’s singles second round. Evans got off to a decent start winning his first round match but Sam Parsons, winner of the recent Hatzor International, proved a step to far for the Irish number 1.

Elsewhere Clara Nistad and Emma Wengberg continued on their merry way in the women’s doubles. The Swedes have played two tournaments and have a 100% winning record. Today in Dublin they showed that they are up for the hat trick easing into the quarter final without dropping a set.