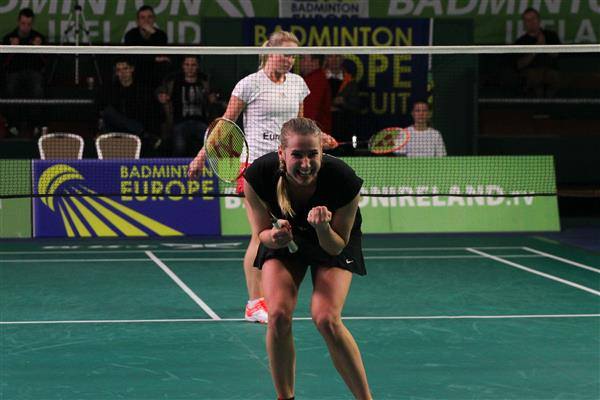 With the Irish challenge faltering at the quarter finals stages of the Irish Open team Denmark stepped up to the mark qualifying athletes into four of Saturday’s final. Danish European Junior Champion, Anders Antonsen continues to prove his class blitzing into the final while Natalia Koch Rohde (pictured) stole the show in the women’s singles to book her third final of the year.

Rohde’s trip to the final has been far from easy as the Dane battled through three, three set games to make Saturday’s final. After ending the challenge of Irish number 1 Chloe Magee in the quarter final Rohde came back from a game down to beat Kati Tolmoff as she hunts her third title of the year.

The Danes final opponent will be Olga Konon as the German went one step further than her semi-final last year in an event that has been good to Konon since it marked her comeback in 2014. Like Rohde, the German came back from a game down to beat Bulgaria’s Linda Zetchiri. Konon is going for a third win this season after winning in Ukraine & Bulgaria in September.

Anders Antonsen will be favourite to lift his third title of the year against Lucas Claerbout. The Frenchman has been the surprise packet of the tournament so far and will be a long priced outsider in tomorrow’s final against the rising star of European badminton.

Stoeva’s blitz their way to yet another final

Bulgaria’s Stoeva Sister have made yet another circuit final and this week in Dublin they have maintained that statistic expelling the minimum energy necessary. Another final without dropping a set and the Bulgarians will be hot favourites against Danes Finne-Ipsen and Hansen after the Danes came through in three games against two-time circuit winners Nistad and Wengberg of Sweden.

In the mixed doubles hot favourites Robert Mateusiak and Nadia Zieba closed in on their sixth title of the year as the Poles hunt down Olympic qualification. Third seeds Grebak and Christiansen will stand in their way after the Danes eased past Dutch pair Barning and Tabeling in today’s semi-final.

In the men’s doubles Cwalina & Wacha edged closer to their 2014 title defence. The Poles are going for a hat trick of Irish titles this week and Cwalina himself is looking to win an unprecedented fourth men’s doubles title in five years.

The Poles will face off against German’s Beck & Kaesbauer after the German’s came through in the final match of the day against Christiansen and Daugaard of Denmark.

For all results from today’s play in Dublin click HERE

For a full photo gallery from the Irish Open click HERE