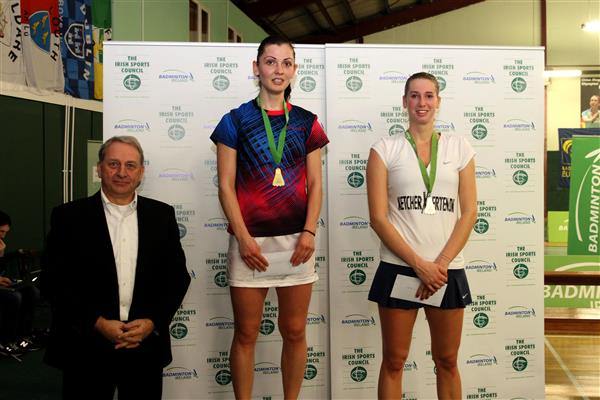 There were two wins a piece for Denmark and Germany in today’s finals of the Irish Open in Dublin while Olga Konon achieved her season hat trick of titles beating Natalia Koch Rohde in the women’s singles to add the Irish title to her victories in Kharkiv and Bulgaria.

Konon set her stall out very early in the competition beating Denmark’s Mia Blichfeldt in the opening round and in today’s final the German ended the dream of Koch Rohde in two games. The Dane looked nervy in the opening game as Konon stretched into an early 14-5 lead and even though the Dane settled towards the end of the game Konon had done enough to win the opener 21-17.

Rohde brought the fight to Konon in the second set as the German was made fight for every single point. Konon’s service variation had the Dane thinking continuously and at 13-10 Konon slipped into another gear winning six of the next seven points to build up a cushion at 19-12 and put herself within reach of the title.

Konon’s power in the end was to much for the Dane to handle and Konon powered home to her third circuit victory this season.

“Ireland has been good to me. I made my tournament comeback here last year from injury and made the semi-final and today to win is a fantastic feeling” said the German after the victory.

Antonsen a class apart in Dublin.

The most pressure European Junior Champion, Ander Antonsen felt this week in Dublin came from within as the Dane rushed to the title with flight to Copenhagen looming ever closer. Antonsen’s opponent Lucas Claerbout from France has been one of the most improved players this season and pushed the Belgian International winner right to the wire in two games.

Antonsen took the opening game 21-18 and the match looked to be going to a third set, and a missed flight for the Dane, when Clearbout secured five games points in the second game leading 20-15. A nervous Frenchman and a focused Dane combined to turn the game on its head as Antonsen won 7 points in a row to win the title with barely enough time to make the airport to fly home to Copenhagen.

“It’s been a very good 2015 and this win here in Ireland has just been the icing on the cake for me” said the Dane immediately after the win.

There have been a few tight battles between Raphael Beck/Peter Kaesbauer and Adam Cwalina/Przemyslaw Wacha in the recent past. The Poles have had the better of the exchanges but today the German’s turned the tables lifting the Irish title and preventing a hat trick of title for the Polish in Ireland.

“After losing the mixed last year it was night to win the men’s doubles this years” said Peter Kaesbauer. “The key was the net and we pushed high as often as possible and Raphi’s power from the rear proved vital”

The Stoeva’s sisters continued on their road to Rio lifting their seventh title of the year but were made fight in three games against Finne-Ipsen and Hansen of Denmark. A second runners up spot for the Danes in successive years while the Bulgarians power on towards the Olympics.

Mathias Christiansen and Lena Grebak upset the odds in the mixed doubles final beating hot favourites Mateusiak and Zieba of Poland. The Danes displayed great composure after losing the opening set to come back and win in three 19-21 21-18 21-18.

For all results for the final in Dublin click HERE