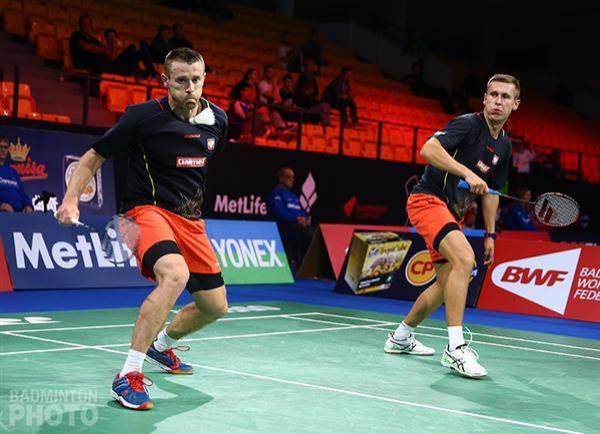 Polish men’s doubles pair Adam Cwalina & Przemyslaw Wacha (pictured) have been a permanent fixture at the business end of circuit tournaments over the past three years. With circa 20 tournament wins and even more finals, quarter final and semi-final appearances the Poles have without doubt been the most consistent pair travelling the Badminton Europe circuit since London 2012.

Ear marked as the pair to beat Cwalina & Wacha set out with a singular focus in 2015 and that is to amass as many world ranking points as possible as they chase one of the coveted doubles qualification spots for the Rio Olympics next summer.

The first half of 2015 could hardly have gone better for the dynamic but recent months while consistent the Poles have only scored adequate points in 2 of 15 tournaments to improve their world ranking as we past the half way stage of the qualification campaign.

A final in Ireland last week was not enough for the Poles both in terms of points and also for them personally as wins are all that count but this week in Italy Cwalina & Wacha have the opportunity to round off 2015 with a bang.

If they are to win this coming week in Milan, they are going to have to once again do it the hard way. A most difficult first round meeting with Durkinjak & Hoelbling will test them from the gun and should they win a quarter final with Beck & Kaesbauer awaits, the Germans beating the Poles last Saturday to win the title in Dublin.

Coming through the bottom half of the draw the Poles will be keeping an eye on Daugaard & Christiansen of Denmark while German youngsters Siedel & Lamsfuss will have desires on the top step of the podium as they continue to improve and a circuit win is surely not too far away for this rising German pair.

Top heavy women’s doubles as the rest try to topple the Stoeva’s.

Like Wacha & Cwalina in the men’s doubles the Stoeva sisters from Bulgaria have been the dominant force in women’s doubles on the circuit since their European junior success in 2013. They have literally been untouchable in what has become them against the rest as they blitz their way around Europe.

This week again in Italy they will be the red hottest of favourites as they attempt to land a hat trick of circuit titles after victories in Wales and Ireland in the past two weeks.

A potential stumbling block for the sisters just might be Fruergaard and Thygesen of Denmark who are on the same side of the draw but where the Danes will match them in most aspects of the game it’s the physical prowess of the Bulgarians that would see them through in a tight three sets.

Milan will also welcome Marc Zwiebler to the tournament as top seed in the men’s singles. The German will be one of the main attractions as he recovers from a persistent foot injury while in the women’s singles Olga Konon seems to be the player to beat this year with Corrales and Schnasse looking to find some kind of form to beat the three-time circuit winner.

In the mixed doubles Nohr & Thygesen skipped the defence of their Irish title last week and will come to Italy fresh after a week at home recovering from their Asian trip. The Danes will be the marked pair with the biggest threat likely to come from fellow Danes and Irish winners Christiansen and Grebak and Welsh winners Nottingham and Westwood of England.