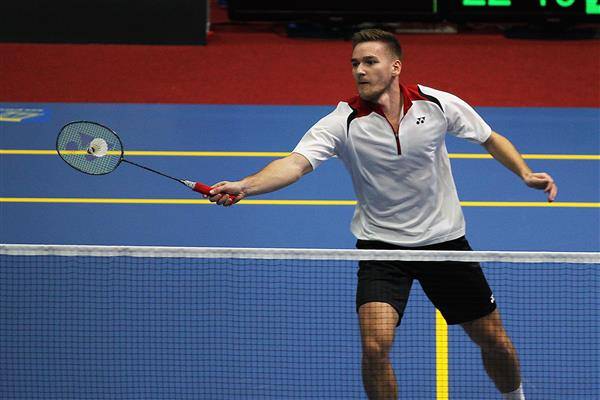 Sitting a 170 in the world rankings, Croatia’s Zvonimir Durkinjak singles results over the past year have been less than inspiring. A runners up spot at the Hungarian International almost twelve months ago has been as good as it got for the Croatian player this past year.

Those who know the game also know that Durkinjak is one of the most talented and versatile players from the minority countries in Europe mixing both singles with mixed and men’s doubles. A decent run in Baku at the European Games was a hint of better things to come and today the Croat proved his class battling through to the semi-finals at the Forza Prague Open after coming through qualification.

Five matches played and four of the five have gone the full distance and after seeing off Nick Fransman in the opening round, Germany’s Dieter Domke was next to fall at the Croats sword before winning an unlikely quarter final against Indonesian Andre Marteen again in three games.

Durkinjak will now fancy his chances in the bottom half of the draw in a semi-final against Poland’s Adrian Dziolko. The Pole has been equally as impressive this week bouncing back after some poor performances at the beginning of this circuit season.

Top seed Marc Zwiebler has cruised through the opening rounds not dropping a set on his way to the semi-final where he will now face Raul Must of Estonia.

Team Germany have bounced back this week in Prague after a poor showing in Belgium two weeks ago. Michael Fuchs and Birgit Michels gained revenge over their Belgian nemesis Nordh and Fabekke in today’s quarter final to set up an all-German semi-final against young guns Lamsfuss and Herttrich.

Russian fourth seeds Vislova and Durkin have shown a welcomed return to form this week after a poor start to this new circuit season. The Russians beat rising French pair Palermo and Kersaudy in the earlier rounds before coming through against Swedes Hogstrom and Ruponen in today’s quarter final.

The Russians will now play one of the pre tournaments favourites Nohr and Thygesen after the Danes blitzed fellow Danes Gravholt and Fruergaard in today’s quarter finals.

Tough test for Gilmour on moving day in Prague.

Scotland’s Kirsty Gilmour was pushed right to the wire in both her matches on moving day when the cream of the tournament normally comes to the top. The Scot was taken to three games in the second round against Mette Poulsen before ending home hopes by defeating Kristina Gavnholt after losing the opening game to the Czech number 1.

Gilmour now moves to the semi-final where she will once again play Denmark’s Line Kjaesfeldt in a repeat of the Belgian semi-final two weeks ago. The Scot will be hot favourite to beat the Kjaersfeldt after two wins this calendar year but a focused Kjaersfeldt will have nothing but revenge on her mind. Gilmour will harbour sweet memories from her first major tournament win on Czech soil in 2012 and the wise money might be on the Scot to do it again in 2015.

Dutch number 1 Soraya DeVisch Eijbegen continued her good run of form this week and ended another tournament prematurely for an under par Karin Schnasse. Other than a lapse in focus in the second game The Dutch number 1 controlled their quarter final and will now face off against Linda Zetchiri who came through in two games against Ulitina of Ukraine.

Elsewhere there was doubles success for France with Labar and Careme justifying their seeding to make the semi-finals in the men’s doubles while the biggest upsets came late in the day in the women’s doubles as Batomene and Lefel took down second seeds Goliszewski and Nelte in just their third tournament together as a pairing while fellow French pair Fontaine and Tran handed a very rare circuit defeat to European Games Champions, the Stoeva sisters of Bulgaria.