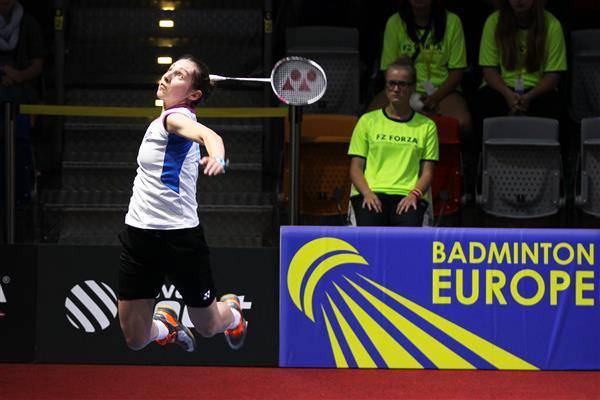 Scotland’s Kirsty Gilmour (pictured) could be excused for calling the Czech Republic a home from home as she landed yet another Czech crown to add to the titles she won in 2012 and 2013 albeit in the countries second city of Brno.

In a remarkable statistic Gilmour is undefeated as a singles player since bursting onto the scene in 2012 winning her maiden international challenge event in the Czech Republic. The signs were ominous two weeks ago as Gilmour made the final of the Belgian International and today Bulgaria’s Linda Zetchiri had no real answers to the confident play from the crafty Scot.

The Bulgarian started well in both games but that was as good as it got for Zetchiri as Gilmour powered home to a 21-16 21-16 win for yet another Czech title.

A welcomed return to form for Russians

Russian duo Nina Vislova and Vitalij Durkin had almost forgotten that feeling of winning an international tournament. It has been almost a year since they won in Bahrain with injury playing its part in the Russians loss of 2015 form.

This week in Prague Durkin and Vislova have looked revitalised and never looked like losing today’s final against Fuchs & Michels of Germany. The Germans are still looking a pale version of their former selves but nothing can be taken away from the dominant performance of Vislova and Durkin in today’s final.

“We have nearly forgotten our last win but I have been struggling with injury for so long it is finally nice to feel like this again” said Durkin.

There was some joy for Michels however as she and partner Isabel Herttrich took the women’s doubles in two games over new French pair Batomene and Lefel.

As expected Marc Zwiebler retained his title in a match that proved fair play is still alive and well in badminton. The German’s opponent was qualifier Zvonimir Durkinjak of Croatia and after losing a close opening game 26-24 The Croat all but dug his own grave in the ultimate show of fair play when trailing 12-6 in the second game.

Zwiebler had a foul called against him for no apparent reason and immediately after Durkinjak handed the next point to the German to right the wrong in what was a crucial juncture in the game. The ultimate display of fair play from the Croat a gesture which Zwiebler was quick to applaud in the game and in his winner’s interview after.

“What Zvonimir did today was amazing. He didn’t have to do that and he shows the kind of guy he is and his actions are an example to everyone.”

“Winning is what I came here to do as I have lost first round in Asia the last few tournaments so this victory is good for confidence going into some big tournaments in Europe over the coming weeks.”

Adam Cwalina and Przemyslaw Wacha finally got the Indian monkey off their backs as in a third time lucky scenario they finally got the better of Aatri & Reddy in and international challenge final. The Poles lost on their two previous meetings, the last only two weeks ago in Belgium, so today was a welcome victory as they retained the title they won last year.

“We just keep on believing and we keep working hard and we knew we could beat them as we were so close to doing it in Belgium two weeks ago. Yes it’s a great feeling to win again as this time of year we tend to find our best form so we are now looking to more wins on the road to Rio” said Cwalina after the victory.