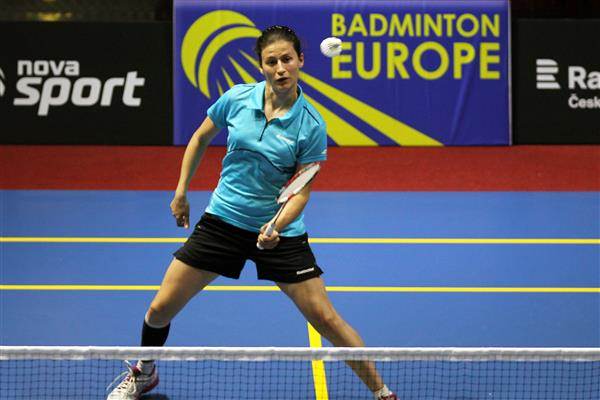 The circuit moves to Sofia this coming week for the 2015 edition of the Babolat Bulgarian International. This year more than any represents a golden opportunity for Linda Zetchiri on home soil after an excellent run to the final in Prague last week.

The Bulgarian number 1 has won her home event on two occasions in the past and along with Petya Nedelcheva have been the backbone of Bulgarian singles over the past decade. What makes this year’s edition all the more important is that is Olympic qualification year and Zetchiri (pictured in Prague final last week) should be in pole position to perform well in Sofia after her Prague performance.

Zetchiri is third seed for the tournament but more importantly her form suggests that she is the best player in the field this coming week. Karin Schnasse has had a torrid time of late where a hectic tournament schedule maybe starting to take its toll.

American Rong Schafer is seeded two and scheduled to meet Zetchiri in the semi-final. Also squashed in the bottom half of the draw is the recent winner of the Kharkiv International, Olga Konon of Germany. The German national champion will be freshest of all the players as she manages her schedule more efficiently with no real Olympic pressure on her shoulders and should continue her rise up the rankings this week as she puts qualification days behind her.

Stoeva’s to benefit from a shortened Prague Open

Last week was one of those rare Stoeva slip ups as the European Games champions failed to reach the final in Prague. Beaten by French pair Fontaine & Tran the Stoeva’s looked a little lost for ideas at the Czech tournament in the quarter final.

In a strange way that loss might serve to galvanise the sister’s march on the title this week. They will be in no mood to slip up again and they just might also have benefited from a rare day off on finals day.

The Stoeva’s will be red hot favourites to win in Bulgaria and with no French in the field this week the main threat to the sisters will come from Lee/Obanana (USA), Bayrak/Yigit (TUR) and the returning Russian pairs after a week of the circuit last week due to their national championships.

Vislova & Durkin looking to go back to back.

There was a welcomed return to form last week also for Russian veteran’s Nina Vislova and Vitalij Durkin. The Russians are second seeds behind Canadian pair Bruce/NG but recent form would put the Russians top of that particular battle.

The real threat to the Russians will come from Mateusiak & Zieba who skipped Prague last week but although not seeded will be the hottest of favourites in Sofia. The Poles are also the same side of the draw as the Russians with both pair’s recent winners on the circuit.

The men’s singles is an open book with all the seeded athletes looking considerably under par these past weeks. All expect Andre Kuriawan Tedjono that is who fresh legs should serve him well this coming week.

Finally the fans at the Babolat Bulgarian International should prepare themselves for the latest installation of the Poland V India men’s doubles battle. Reddy & Aatri of India have a recent 2:1 winning ratio over Cwalina/Wacha of Poland but the Poles will be buoyed by their most recent meeting only a few days ago in Prague to regain their Prague Open title.

Article and Images by Mark Phelan for Badminton Europe.