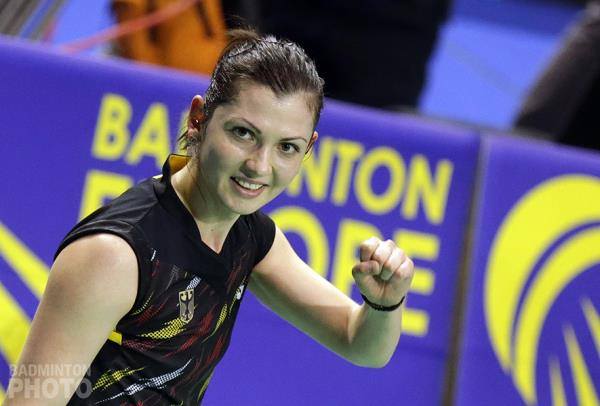 The home supporters had a lot to be happy about in Sofia as the Stoeva Sisters recaptured their form to lift their home title. However its team Germany who has most to shout about after victories in the men’s doubles for Kaesbauer & Beck while Olga Konon claimed her second title of the new season with victory in the women’s singles.

Konon (pictured) has set the circuit alight this new season after winning the Kharkiv International at the beginning of September to announce her return to top level badminton. The German national champion maintained her unbeaten run today in Sofia lifting the women’s singles in three games against Ukraine’s Maria Ulitina.

It was a case of history almost repeating itself for Konon as in the opening match of the tournament she lost the very opening game just as she did in Kharkiv a month ago. The manner of her victory over second seed Rong Schafer (USA) in the quarter final and the inform Linda Zetchiri (BUL) in yesterday’s semi-final reaffirmed her class and Konon was not about to be upstaged by Ulitina in today’s final.

The German has clearly found the mental capabilities to match her talents after being shelved by her federation at the beginning of the year which certainly seems to suit her personality and game. Konon lost the opening game in today’s final but came right back to win 21-14 which will catapult her well inside the top 100 in the world and marked her out once again as one of the best singles players in Europe.

Germany had added reason to celebrate in today’s finals. As if Konon’s tale of returning from injury to win twice this season was not enough, the men’s doubles victory for Peter Kaesbauer & Raphi Beck is the stuff fairy tales are made of.

The German pair in only their second tournament together beat top seeds Aatri & Reddy from India. It was the Indians who beat the Germans a few weeks back in Belgium in their first tournament together but today the German’s turned the tide to steal victory today. It was two final defeats in two weeks for the Indians as Germany, out of the blue, have stumbled across another quality men’s doubles pair for the medium and even long term future.

Stoeva’s put Prague firmly behind them.

The Bulgarian Stoeva Sisters had one of those very rare off days in Prague last week, getting knocked out at the quarter final stage in the Czech capital. Today on home turf there was to be no such mistake as the sisters romped home to their home title in just 30 minutes.

The early rounds were not vintage Stoeva only coming through in three games in the quarter and semi-finals. Today was however very different. With the big four tournaments coming up over the next month across Europe the Stoevas today recaptured the form that will set them up as ones to beat next week at the Dutch Open GP.

Polish mixed doubles pair Mateusiak & Zieba did what everyone expected them to do today by lifting their fourth title in a row. In just 5 starts since coming back together the Poles have now proven unbeatable at circuit level and surely a dash towards Rio is now more of a reality than an outside bet.