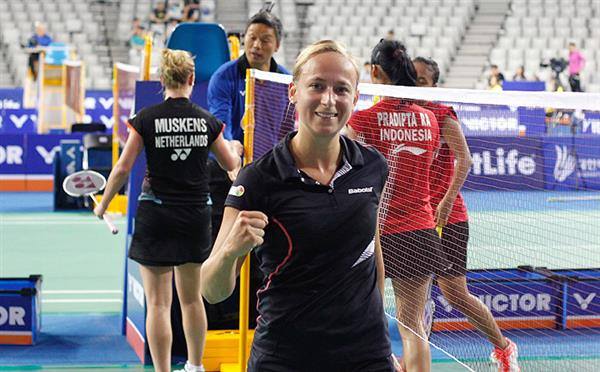 The Dutch Open Grand Prix gets underway tomorrow in Almere, The Netherlands as the BWF big guns arrive in Europe for a four week stint covering the full spectrum of high level badminton. With prestigious Super Series, Premier Super Series and Grand Prix Gold events to follow Selena Piek will be using her home event as a warm up for bigger thing to come.

The Dutch doubles and mixed doubles specialist will have the added pressure this year as being one of the hot favourites to win after a year stepping it out on the courts with the world’s elite. Alongside partner Eefje Muskens they have become a force to be reckoned with at Super Series level sitting at number 9 in the world and are the pair to beat in Almere this week.

Piek & Muskens return as defending champions but the difference this year there is a whole new weight of expectation on their shoulders as the pair everyone wants to beat. The draw has also been kind to the Dutch as their first real test should not come until the quarter finals where English duo Brown & Robertshaw should be waiting.

Opposing the Dutch at the bottom half of the draw are the Stoeva sisters who will be buoyed after winning their home international with ease just last Saturday. German pair Michels and Herttrich will also bring a swagger to Almere after their recent win at the Prague Open.

Piek will also pair up with Jacco Arends in the mixed doubles and as second seeds should produce something better than their first round defeat last year. Indeed Jacco Arends has grown into his role alongside Piek since last year and together they are now a formidable couple and Grand Prix wins should be routine for them over the coming months.

Top seeds Michels & Fuchs have been struggling a bit with form of late but will really need to be ready from the gun as Irish number 1 pair Sam & Chloe Magee will be ready to expose any weakness. Packed into the top half of the draw are also the pair of the season so far Mateusiak & Zieba, Durkin & Vislova recent Prague Open winners and rising German stars Lamsfuss & Herttrich. Whoever comes from the top half of the draw will have had a hard route to the final.

Gilmour’s Grand Prix to grab by the horns.

While Kirsty Gilmour travels to Almere as fifth seed the facts are pretty clear and they state that Gilmour is the form player and hot favourite for this Grand prix win. Chambly club mate Beatriz Corrales is on the same side of the draw as Gilmour but the last few months have been poor for the Spanish number 2 but she does peak at least 2 times a season so maybe this is to be her time.

Probably the biggest threat to all the main draw protagonists will be Olga Konon. The German will face 1 qualifying round, which will suit her, and after two wins from two on the circuit is in the form of her life. A probably first round tie against Thailand’s Nitchaon Jindapol will tell a lot of Konon’s form but the German is now a real force again in Europe and the player others wish to avoid.

The men’s singles has been robbed of both top seeds and Marc Zwiebler has been forced to withdraw through injury. Once again the men’s singles event is crying out for someone to come from the pack just as Ajay Jayaram did last year on his return from injury. The Indian is seeded 3 this year and after a career best performance at the Korean Open two weeks ago will be the man to catch in Almere.

Finally Koo & Tan are the pair who jump out at you in the men’s doubles draw. The Malaysians represent Asia’s best opportunity this coming week in Almere which will also see the latest episode in the side show that is Europe against Aatri and Reddy of India. The Indians have come unstuck in Europe for the last two weeks and have both pairs who have beaten them, Cwalina & Wacha (POL) and Kaesbauer & Beck (GER) on their side of the draw this coming week.

To view the full draws from the Dutch Open click HERE