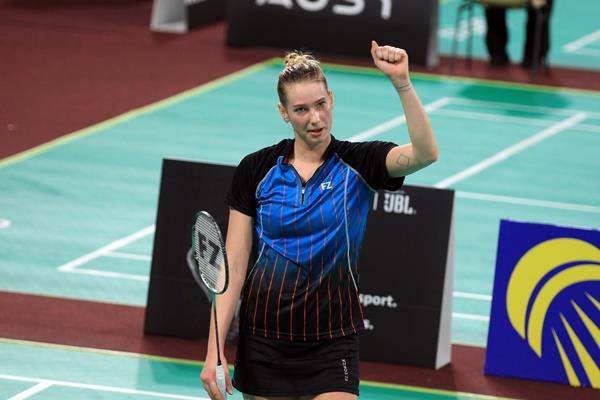 Denmark’s Natalia Koch Rhode (pictured) lifted her second title of the year today in Bulgaria adding the Eurasia Bulgarian International title to the Orleans International she won, back in March. The tall Dane, who was hampered by injury for the majority of the early part of last season, has bounced back in 2015 as she begins her climb up the world ranking list.

In today’s final Koch Rhode defeated Germany’s rising start Yvonne Li, winner of Badminton Europe’s young player of the year for 2014, in a tournament where the Dane just dropped one game in 5 matches.

Hard earned title for Must

Unlike Koch Rhode, Estonian number 1 Raul Must earned his title today the hard way. A total of five matches with no fewer than three of those matches going to three games. Must, who was runner up at the recent Russian Open GP in Vladivostok, took just 35 minutes in today’s final to beat number 4 seed from France, Lucas Claerbout.

1 out of 3 for France on Finals day

There was some joy for the French however as Jordan Corvee and Julien Maio lifted the men’s doubles title beating local Bulgarian pair Daniel Nikolov and Ivan Rusev in what was the longest match of the day extending to 1 hours play with the French coming through 21-17 in the deciding game.

Article and image by Mark Phelan