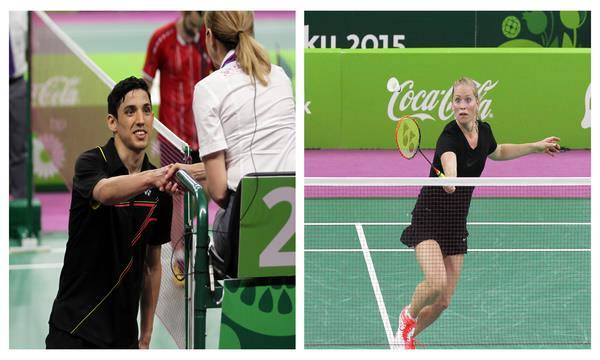 It was certainly a day for the second seeds in the finals of the 2015 I.B.B Turkish International with no fewer than four of the five newly crowned champions coming from the seeded side of the bottom half of the draws.

Estonia’s Kati Tolmoff took only 24 minutes to claim the women’s singles title while Belgian number 1 Yuhan Tan was taken to three games by top seed Misha Zilberman of Israel. Tolmoff was the outstanding women’s singles player on show this week in Istanbul; and didn’t drop a single game en route to her first title of 2015. In today’s final the Estonia easily brushed off the challenge of Hungary’s Laura Sarosi 21-13 21-11 in what could prove to be a vital win for Tolmoff come May 2016 when the qualification race for the Rio Olympics draws to a close.

Yuhan Tan’s victory in the men’s singles was testament to the phrase ‘A week is a short time in sport’ as the Belgium number 1 was forced to withdraw in his match against Derek Wong of Singapore in round 1 of the world championship is Jakarta last week due to a bout of food poisoning.

A little more than a week later and a serious volume of air miles Tan climbs the top step of the podium against Misha Zilberman another player who had his fair share of trials and tribulations in Jakarta.

The Belgian has had the better of the matches with Zilberman in the past and today was to prove no different for Tan. The Israeli took the opening game 21-12 but that was as good as it got for Zilberman as Tan bounced right back to win in three games with a 21-18 win in the deciding rubber.

Where every single point is crucial in the race for Rio, Tan like Tolmoff, may well look back at this international series win and the collection of 2500 world ranking points as a pivotal point in their qualification race.

“It feels really great of course to win this tournament! I have been feeling in good shape the last few months but was disturbed by some injuries and the food poisoning last week at the worlds in Jakarta. I am hoping now this will be the start of some more good results especially ahead of my home International in Belgium in a few weeks which is always tough but I hope to show my best” said Tan to Badminton Europe after the win in Turkey.

It was a decent return for what was a young Turkish team taking part in Istanbul this week. In both the mixed doubles and women’s doubles Fatma Nur Yavuz walked away with a pair of wins partnering Kader Inal in the women’s doubles to a two game victory over fellow Turkish pair Cemre Fere and Ebru Yazgan.

Yavuz teamed up with Melih Turgut in the mixed doubles but were pushed to three games against yet another Turkish pair Koca & Demirtas before coming through 21-11 in the deciding game.

In the men’s doubles Krausz (Hun) and Samatcha (Tha) won the title in a very one-sided final defeating Iranian pair Fesahati & Khanjani 21-6 21-6 in a match that lasted just 18 minutes. After a great tournament for the Iranians the final just proved to be one step too far.