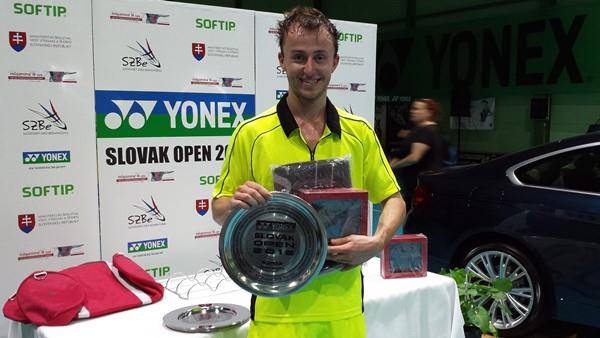 England’s Alex Lane (pictured) had several reasons to celebrate this weekend in Slovakia as he lifted the 2015 Yonex Slovak Open title just a day after celebrating his 20th birthday.


The young Englishman, the European U17 champion from 2011, had spent his last three birthdays competing in Slovakia and came through the 2015 event without dropping a single game to lift the title, his first at senior level, as he waved goodbye to his teenage years.

Lane had signalled his intentions from very early on in the tournament by taking down number 4 seed Vilson Vattanirappel (AUT) in the opening round on Friday. A two game quarter final win over eight seed Daniel Font (WAL) confirmed the Englishman’s form and Finland’s emerging youngster Henri Aarnio had no answers in the final as Lane raced to the title with a 21-15, 21-9 victory.

“I thought I was playing well throughout the tournament and following up my good form of last week, it feels great to win a tournament on the senior stage after having some good success as a junior. I’ve lost in the semi-final on my 18th and 19th birthdays the last two years, so when I turned 20 the other day it was great to win and hopefully there is more to come.” Commented Lane after his victory.

Two out of three ain’t bad for English youngsters

It was not to be the perfect three golds from three finals for the English as men’s doubles pair Adamson & Sankey went down in two games to Vietnamese pair Tuan Duc Do & Ngoc Manh Nguyen but all things considered the tournament in Slovakia has proven to be a fruitful week for a very young travelling English team.

Kristina Gavnholt made it three wins from three tournaments lifting the women’s singles title in Trencin. After victories in Lagos and the Russian Open Grand Prix the top seeded Czech number 1 eased to victory 21-10 21-15 against Gayle Mahulette of The Netherlands.

There was some joy for the Dutch player however, as she teamed up with Cheryl Seinen to claim the women’s doubles title. The Dutch pair climbed the top step of the podium to claim gold after a faultless tournament coming through without dropping a set all week.