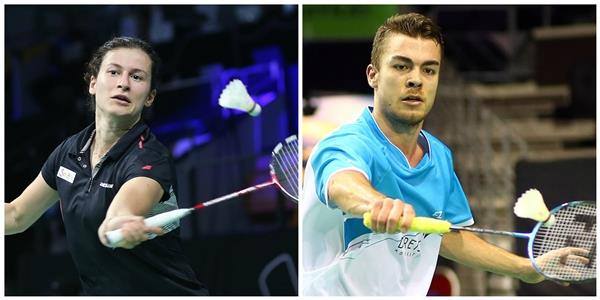 If badminton had seasons certainly September would signal the real arrival of spring each badminton year. Some of the circuit players have already dipped their toes in some of the early August internationals across Europe as if to test the temperature of the water while the rest normally wait for the arrival of the first buds of spring to emerge from their training grounds.

The first buds burst open this coming week in Ukraine as some of Europe elite circuit players travel to the eastern city of Kharkiv for the annual Babolat Kharkiv International, the first of three International challenge rated tournaments in September on the Badminton Europe calendar.

Both Linda Zetchiri (BUL) and Rasmus Fladberg (DEN) return to Ukraine to defend the title they won in 2014 when the tournament tested the experimental 5 games to 11 system being trialled by the BWF.  2014 was a weakened event due to the preceding political troubles and even though those troubles still exist this year’s entry is a marked step up in quality.

Bulgaria sit in the top two seeded positions in the women’s singles event with Petya Nedelcheva as number 2 alongside top seed Zetchiri. Scattered throughout the draw are some seasoned competitors with Lianne Tan (BEL), highest ranked Ukrainian Marija Ulitina and the Olga Konon (GER) the 2011 champion and fresh from a month’s training in Indonesia all attempting to make a big impact in Kharkiv.

Hidden deep within the women’s singles draw are the returning Larisa Griga & Elena Prus who will be aiming to show the value of experience to the younger generation of Ukrainian players when the tournament kicks off on Thursday.

Denmark’s Rasmus Fladberg returns as defending champion in what has been a very hit and miss twelve months for the Dane since winning in 2014. Fellow Dane Joachim Persson is top seed but with Hurskainen (SWE), Rogalski (POL), Koukal (CZE) and home favourite Dmytro Zavadsky all on the veteran Dane’s side of the draw, Persson will have a tough route to the final.

Thomas Rouxel is second seed and has the unenviable task of taking on Kestutis Navickas in the opening round. The winner will most probably have a quarter final against one of the most improved players over the last 12 months, Poland’s Adrian Dziolko.

For both Fladberg and Zetchiri it will be a tough title defence made all the more difficult given it is Olympic qualification year.

Veteran Poles look like pair to beat in mixed doubles

It was a surprise to many to see the names of Robert Mateusiak and Nadia Zieba back together after a few years away from the tour as a partnership. The 2012 European Champions are back and have hit the ground running with a win at the Lagos International and a runners up spot at the White Nights earlier in the summer, both events at the same level as this week’s Kharkiv International. While unseeded all the wise money will be on the Poles to lift the mixed doubles title.

The Poles are on the same side of the draw as Indian second seeds Tarun & Reddy with a possible quarter final against Mateusiak’s Chambly club mate Bastain Kersaudy and partner Lea Palermo as an appetizer to that possible semi-final with the Indians.

Top seeds are French pair Mittelheisser & Fontaine who will arrive in Ukraine fresh from a holiday in Bali after an uneventful showing at the worlds in Jakarta as they look to push towards a top 16 in the world in an effort to qualify for Rio.

In the men’s doubles Cwalina & Wacha (POL) will aim to do what they do so often and go out and blitz the field at circuit level but Ellis & Mills (ENG) will have other ideas and if both slip up Mittelheisser and Kersaudy (FRA) will be there to pounce.

England’s Heather Olver and Lauren Smith are overwhelming favourites to lift the women’s doubles after an indifferent summer internationally. It could prove to be a profitable September for the English girls with no points to defend but nothing less than International challenge wins will improve their world ranking.

For all draws from the Babolat Kharkiv International 2015 click HERE