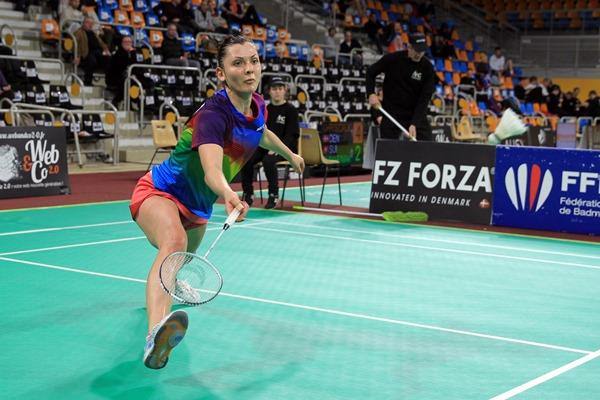 Olga Konon (pictured) came full circle today in Kharkiv winning the women’s singles a title she first won back in 2011 when the world was at her feet in badminton terms.

The German has endured a torrid time over the past few seasons with injury and even without the support of her federation the gutsy Saarbrucken based player has battled back to prove to everyone that even in the face of adversity where there is a will there is always a way.

Konon struggled in her opening match of the tournament against local, and fellow German league player, Natalia Voyteskh only coming through in the deciding game 23-21. That match certainly was not a tournament winning performance but the German has found ways to battle her own daemons these past years and grew into the tournament with each match.

With injury concerns firmly behind her the manner of her quarter final win over Petya Nedelcheva 21-7 21-13 was a real signal that Konon was a real contender to win this week in Ukraine. Another 3 set win over one of the circuit players of the year, Belgium’s Lianne was another accomplished win in a match that she probably would have found ways to loose not so many months ago.

Konon still went into today’s final as the underdog against Chochuwong Pornpawee. The Tai player had blitzed all before her this week in Kharkiv which included a heavy defeat of top seed Linda Zetchiri in the first round.

After taking the opening game the German sensed that her opponent was broken and raced home to a 21-16 21-10 win on a court that has been good to her over the years.

“I really struggled in my opening match of the tournament but I found a way just to pull through and win that game which pleased me. It is so great to be back winning again and to experience that winning feeling as there is nothing like it. This tournament has been good to me and I feel comfortable here and I hope I have shown people what I am capable of and that I am back.”

Hurskainen back to winning ways

2015 has not exactly been a vintage year for Swedish number 1 Henri Hurskainen. The Swede had been frustrated by injury for the early part of the year which understandably hampered his progress and ultimately dented confidence. It has almost been a year since his last win which came which came at the USA International challenge in 2014.

His win today at the Kharkiv International could hardly have come at a better time as we head into the heart of the Olympic qualification period. Hurskainen had a two game win over Joachim Persson of Denmark in the quarter final which was sure to be a huge boost to his confidence on his march to the title.

In today’s final the Swede faced England’s Rhys Walker and experience proved to be a huge factor in Hurskainen’s victory. Like Konon in the women’s singles, Hurskainen dominated and even when 4-0 down at the beginning of the second game the Swede settled after the interval to win his first European challenge event in a few years when he had come so close on many occasions.

“I felt a bit nervous going into the final since it’s been a long time since my last one. But I got a good start and could relax more during the first set. In the second set I got a bad start ( 0-4 ) and had to work hard to get back in front. After the break at 11 I started to get the rhythm back and was able to win quite easy in the end. I am very happy with this win and hopefully I can use this as a boost for the rest of the tournaments this year” (extract from Henri Hurskainen’s official facebook page)

Polish veterans and 2012 European mixed doubles champions Robert Mateusiak & Nadia Zieba added yet another title to their long list of achievements as they start to climb back up the world rankings after some time away from the game as a partnership.

The Poles have now had three tournaments under their belt since their return and two wins and a runners up spot is a pretty good return for their travels.

Today Zieba and Mateusiak comfortably saw off the challenge of top seeds Mittelheisser & Fontaine of France but there was no joy for Polish men’s doubles top seeds Wacha & Cwalina as they went down in two games to Issara & Puangpuapech of Thailand.

Thailand also dominated the women’s doubles final as Smith & Olver failed to shine against Kittiharakul & Prajaiong as the Thai’s climbed the top step of the podium reversing the tournament seeding.